altitude, vertical distance of an object above some datum plane, such as mean sea level or a reference point on the earth's surface. It is usually measured by the reduction in atmospheric pressure with height, as shown on a barometer or altimeter. In surveying and astronomy, it is the vertical angle of an observed point, such as a star or planet, above the horizon plane. The altitude of a feature of the earth's surface is usually called its elevation. Recent spacecraft instrumentation has also measured vertical distances on the earth and other planets, determining the height of planetary features by means of radar and optical imaging.

In astronomy, altitude is the angular distance of a heavenly body above the astronomical horizon as determined by the angle which a line drawn from the eye of the observer to the heavenly body makes with the plane of the horizon. The reading of the apparent altitude, as determined by a telescope attached to a graduated circle, must be corrected for refraction by the atmosphere and for certain other effects to ascertain the true altitude. The altitude of the north celestial pole, which is approximately that of the star Polaris, is equal to the observer's latitude.

The angular distance of a point or celestial object above or below the horizon, or of an object, such as an artificial satellite, above mean sea level. Altitude and azimuth are coordinates in the horizontal coordinate system.
Collins Dictionary of Astronomy © Market House Books Ltd, 2006

the angular displacement of an observed object, such as a flight vehicle or a celestial body, above the celestial horizon. In astronomy, altitude is used together with azimuth to determine the direction to an object in the horizon system of coordinates.

[′al·tə‚tüd]
Abbreviated alt.
(engineering)
Height, measured as distance along the extended earth's radius above a given datum, such as average sea level.
Angular displacement above the horizon measured by an altitude curve.
(mathematics)
The perpendicular distance from the base to the top (a vertex or parallel line) of a geometric figure such as a triangle or parallelogram.
McGraw-Hill Dictionary of Scientific & Technical Terms, 6E, Copyright © 2003 by The McGraw-Hill Companies, Inc. 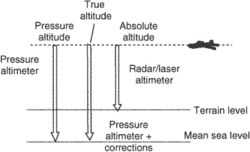 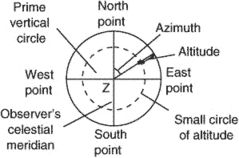 Altitude (celestial).
.
i. The vertical distance of a level, a point, or an object considered as a point, measured from mean sea level (ICAO). In the case of aircraft in flight, it is normally expressed in flight levels or hundreds of feet. For example, an aircraft flying at 25,000 ft AMSL (above mean sea level) would be said to be flying at flight level 250. A barometric altimeter shows pressure altitude. When it is corrected for instrument errors and necessary compensation is made for variation from standard atmospheric conditions, it is called a true altitude. Absolute altitude is measured by a radio, radar, or laser altimeter. Absolute altitude is the true distance from the surface of the earth at that point. In some definitions, heights, which are the vertical distance of an object from an object, point, or level above ground or other reference plane, are also called altitude, such as in AGL (above ground level) altitude, MSL (mean seal level) altitude, and indicated altitude (that indicated by an altimeter).
ii. The angular displacement above the horizon; the arc of a vertical circle between the horizon and a point on the celestial sphere measured upward from the horizon from 0° to 90°. Angular displacement below the horizon is called negative altitude, or dip. See also computed altitude and density altitude.
An Illustrated Dictionary of Aviation Copyright © 2005 by The McGraw-Hill Companies, Inc. All rights reserved

1. Geometry the perpendicular distance from the vertex to the base of a geometrical figure or solid
2. Astronomy navigation the angular distance of a celestial body from the horizon measured along the vertical circle passing through the body
Collins Discovery Encyclopedia, 1st edition © HarperCollins Publishers 2005