amphitheater (ămˈfəthēˌətər, ămˈpə–), open structure used for the exhibition of gladiatorial contests, struggles of wild beasts, sham sea battles, and similar spectacles. There is no Greek prototype of amphitheaters, which were primarily Roman and were built in many cities throughout the empire. More or less well-preserved examples are at Rome (see Colosseum), Verona, and Capua in Italy; at Nîmes and Arles in France; at Cirencester in England; and at sites in Sicily, Greece, and North Africa. The typical amphitheater was elliptical in shape, with seats, supported on vaults of masonry, rising in many tiers around an arena at the center; corridors and stairs facilitated the circulation of great throngs. The arena itself was usually built over the quarters for gladiators, wild animals, and storage. Until the erection of the Colosseum (A.D. 80), practically all amphitheaters were of wood, the notable exception being that of stone built at Pompeii c.70 B.C. The word amphitheater is now applied to modern structures which may bear little resemblance to their ancient prototypes.
The Columbia Electronic Encyclopedia™ Copyright © 2022, Columbia University Press. Licensed from Columbia University Press. All rights reserved.

A circular, semicircular, or elliptical auditorium in which a central arena is surrounded by rising tiers of seats; originally for the exhibition of combat or other public events.

[′am·fə‚thē·ə·tər]
(architecture)
A structure or large room containing oval, circular, or semicircular tiers of seats facing an open space.
(geography)
A valley or gulch having an oval or circular floor and formed by glacial action.
McGraw-Hill Dictionary of Scientific & Technical Terms, 6E, Copyright © 2003 by The McGraw-Hill Companies, Inc. 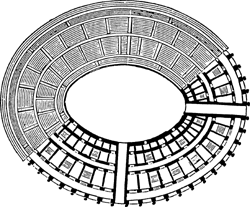 amphitheater
1. A circular, semicircular, or elliptical auditorium in which a central arena is surrounded by rising tiers of seats.
2. (Brit.) The first section of seats in the gallery of a theater.
3. Any outdoor theater, esp. of the classical Greek type.
McGraw-Hill Dictionary of Architecture and Construction. Copyright © 2003 by McGraw-Hill Companies, Inc.

(US), amphitheater
1. a building, usually circular or oval, in which tiers of seats rise from a central open arena, as in those of ancient Rome
2. any level circular area of ground surrounded by higher ground
3.
a. the first tier of seats in the gallery of a theatre
b. any similarly designated seating area in a theatre
Collins Discovery Encyclopedia, 1st edition © HarperCollins Publishers 2005

Feedback
Flashcards & Bookmarks ?
Please log in or register to use Flashcards and Bookmarks. You can also log in with
Flashcards ?
My bookmarks ?
+ Add current page to bookmarks
Mentioned in ?
References in periodicals archive ?
With its circular triple-tiered structure, amphitheatrical appearance, and hierarchical deployment of the three classical orders, the obvious antique model was the Colosseum in Rome.
New approaches to social history. Myth, memory, and place: Monmouth and Bath 1750-1900
"'Amphitheatrical' Hippo-Stadia," in Caesarea Maritima: A Retrospective after Two Millennia, ed.
A Roman Circus in Corinth
Schnapp, a cultural historian and professor of comparative and Italian literatures at Stanford University, draws on a wealth of never before published or translated archival sources to describe Ciocca's visionary ball-bearing factory in Soviet Russia, his roadways that facilitated the Agnelli's expanding FIAT automobile industry, his blueprints for Mussolini's "Third Rome" or EUR (Esposizione Universale Romana), his free standing "fast houses," and the amazing 1937 amphitheatrical space for 20,000 public spectators.
Building Fascism, Communism, Liberal Democracy: Gaetano Ciocca - Architect, Inventor, Farmer, Writer, Engineer
The stunning exception is the new Braga stadium, where Eduardo Souto de Moura radically re-envisages the amphitheatrical form as a tent dug into a mountainside, in which the man-made artifact simultaneously becomes part of and emerges from the natural landscape.
Sports spectacle: carved into a mountainside, Braga's new stadium is a radical reinvention of the sports amphitheatre