see barometerbarometer
, instrument for measuring atmospheric pressure. It was invented in 1643 by the Italian scientist Evangelista Torricelli, who used a column of water in a tube 34 ft (10.4 m) long.
..... Click the link for more information. . 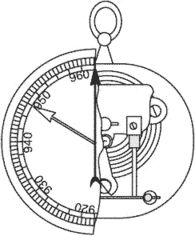 a device for measuring atmospheric pressure without the use of fluids. It consists of a partially evacuated metal chamber, the thin corrugated lid of which is displaced by variations in the external air pressure. This displacement is magnified by levers and made to operate a pointer

Feedback
Flashcards & Bookmarks ?
Please log in or register to use Flashcards and Bookmarks. You can also log in with
Flashcards ?
My bookmarks ?
+ Add current page to bookmarks
TheFreeDictionary presents:
Write what you mean clearly and correctly.
Mentioned in ?
References in periodicals archive ?
Aneroid barometers could be set in simple round cases rather like clocks, and were also enclosed in traditional banjo cases, with a thermometer included above the dial.
ANTIQUES: Whatever the weather
He was known to have performed an experiment comparing the performance of the new aneroid barometer supplied by Negretti and Zambra against that of the mercury barometer.
Sale is all set to raise the bar