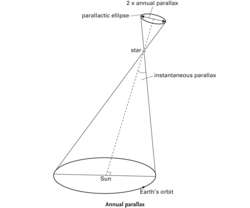 (heliocentric parallax) The parallax of a celestial body that results from the change in the position of an observational point during the Earth's annual revolution around the Sun: nearby stars are seen to be displaced in position relative to the more remote background stars. The instantaneous parallax of a given star is the angle formed by the radius of the Earth's orbit at the star; it varies through the year as the orbital radius varies. If the positions of a star are determined during one year they are found to describe an ellipse – a parallactic ellipse – on the celestial sphere. The annual parallax, π, of the star is equal to and can be measured from the semimajor axis of the ellipse.

Annual parallax is the maximum parallactic displacement of the star and occurs when the angle Earth-Sun-star is 90° (see illustration). It is thus expressed by the relation sin π = a /d , where a is the semimajor axis of the Earth's orbit and d is the star's distance from Earth. Since π is extremely small (<1″), this reduces to π = a /d . If a is assumed to be unity (i.e. one astronomical unit) then a measurement of π in arc seconds will be equal to the reciprocal (1/d) of the distance in parsecs.

The parallax of a star determined directly from a known baseline and using the principle of triangulation, i.e. from measurements of annual parallax, is termed trigonometric parallax. Due to its tiny value annual parallax from Earth can be measured only (photographically from Earth) with reasonable accuracy for stars within about 30 parsecs (π > 0″.03). Spacecraft such as Hipparcos can measure annual parallax with a very much greater accuracy, to 0″.002, allowing distances up to 500 parsecs to be determined. Microarcsecond measurements are planned for future spacecraft. Only about 3000 stars are known to have annual parallaxes exceeding 0″.04, the nearest star – Proxima Centauri – having the greatest value (0″.772).

[′an·yə·wəl ′par·ə‚laks]
(astronomy)
The apparent displacement of a celestial body viewed from two separated observation points whose base line is the radius of the earth's orbit. Also known as heliocentric parallax.
McGraw-Hill Dictionary of Scientific & Technical Terms, 6E, Copyright © 2003 by The McGraw-Hill Companies, Inc.

Feedback
Flashcards & Bookmarks ?
Please log in or register to use Flashcards and Bookmarks. You can also log in with
Flashcards ?
My bookmarks ?
+ Add current page to bookmarks
Mentioned in ?
References in periodicals archive ?
View the Copernican theory as Riccioli and Lansbergen did--as the telescopic appearance of stars and the lack of annual parallax of their time said they must view it--with titanic stars that could only be explained as the stupendous work of the Best and Greatest Artist, the fore-court of God's heaven for people to see.
The work of the Best and Greatest Artist: a forgotten story of religion, science, and stars in the Copernican Revolution
Numerical tests revealed that the computations of apparent star positions must include data on proper motion and annual parallax. Taking into account the results obtained in numerical tests, the content data of selected star catalogues were reviewed in terms of the number of stars, the accuracy of star positions, and data accessibility on annual parallax and proper motions.
Some remarks about the calculation of apparent places of stars for automatic determination of vertical deflection components
successful detection of annual parallax. For in the Tychonic system the
A true demonstration: Bellarmine and the Stars as Evidence Against Earth's Motion in the Early Seventeenth Century
The team used the worldwide Very Long Baseline Array (VLBA) to measure the annual parallax shift of four compact radio sources in the nebula.
The Orion Nebula, Exactly
The parsec (which equals 3.26 light-years) is defined as the distance at which a star will show an annual parallax of one arcsecond.
Purge the parsec