A small molding, usually circular in plan and angular in section, encircling the lower part of a Doric capital above the necking; a shaft or cluster of shafts fitted at intervals with rings. 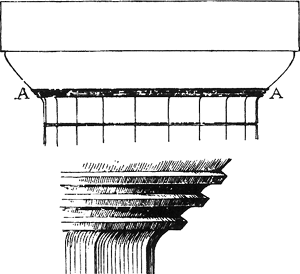 annulets: A, of a Doric capital. Shown enlarged in lower figure
A small molding, usually circular in plan and square or angular in section; esp. one of the fillets encircling the lower part of the Doric capital above the necking.
McGraw-Hill Dictionary of Architecture and Construction. Copyright © 2003 by McGraw-Hill Companies, Inc.

Feedback
Flashcards & Bookmarks ?
Please log in or register to use Flashcards and Bookmarks. You can also log in with
Flashcards ?
My bookmarks ?
+ Add current page to bookmarks
Mentioned in ?
References in periodicals archive ?
ABDOMINAL SEGMENTS: (1) ALL DIVIDED INTO 2 ANNULETS (+); NOT ALL DIVIDED INTO 2 ANNULETS (--).
Description of the mature larva of the sand wasp Bembix bidentata and its parasitoids
As other studies have shown, (16) variations are abundant among genuinely Archaic capitals, but with the elimination of capital C there is reason to doubt whether such a simple design, devoid of both a groove at the top of the echinus and annulets (or other decorative zone) at the bottom of the echinus, ever existed among monumental Doric capitals.
60) did not give a specific date for capital C, but he clearly regarded it as early and suggested that the capital's lack of annulets reflected a pre-monumental form of capital that also gave rise to the Tuscan capital.
Capital C from the Argive Heraion