[ə′nən·sē·ād·ər]
(engineering)
A signaling apparatus which operates electromagnetically and serves to indicate visually, or visually and audibly, whether a current is flowing, has flowed, or has changed direction of flow in one or more circuits.
McGraw-Hill Dictionary of Scientific & Technical Terms, 6E, Copyright © 2003 by The McGraw-Hill Companies, Inc.

1. A signaling device, usually electrically operated, that emits an audible signal and/or a visual indication under selected circumstances; for example, it may sound an alarm in the case of fire or unauthorized entry.
2.See car annunciator.
McGraw-Hill Dictionary of Architecture and Construction. Copyright © 2003 by McGraw-Hill Companies, Inc. 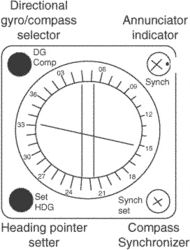 Indicator flag in a gyrocompass that alternates between a dot and a cross and does not settle on either when AC (alternating current) supply is on. If the compass drifts, then either the dot or the cross will be visible, and the compass will not annunciate.
An Illustrated Dictionary of Aviation Copyright © 2005 by The McGraw-Hill Companies, Inc. All rights reserved

Feedback
Flashcards & Bookmarks ?
Please log in or register to use Flashcards and Bookmarks. You can also log in with
Flashcards ?
My bookmarks ?
+ Add current page to bookmarks
Mentioned in ?
References in periodicals archive ?
Almost a decade after the annunciatory experience of his dreams, Descartes returned to this use of doubt in a more rigorous manner: in part 3 of the Discourse he dates to the years 1628-29 his formulation of the arguments that led him through a systematic doubt of everything that could be doubted to the Archimedean point of "I think, therefore I am," and from thence to a reconstruction of philosophy.(26) His letters, as R.H.
The dreamer's path: Descartes and the Sixteenth Century
Timbres are rewardingly explored: brass in jagged annunciatory fanfares, extremes of woodwind registers opening up chording of vast inference, serene punctuations dividing paragraphs of hectic activity and a big trumpet summons dissolving into a heroic flute skirmish.
Reviews: Lifted on wings of Falling Angel; MUSIC CULTURE Birmingham Contemporary Music Group CBSO Centre ****
Lee.Ta."--from the annunciatory "Lo" across the medial lees to a "Ta" of farewell, the novel is writ small in this ringing invocation.
Searching high and Lo: unholy quests for Lolita
Nonetheless, Brooks began writing in the late sixties with a new awareness that, if "shrieking into the steady and organized deafness of the white ear was frivolous," there were, in contrast, "things to be said to black brothers and sisters, and these things, annunciatory, curative, inspiriting, were to be said forthwith, without frill and without fear of white presence" ("Flowers" 1).
A prophet overheard: a juxtapositional reading of Gwendolyn Brooks's "In the Mecca"
A close look at the multiple meanings in each scene reveals that Bresson's scriptural allusions (redeeming sacrifice, annunciatory angel, minister of mercy) enrich the film's overall liberating message while maintaining a firm hold on history, physical reality, and the things of this world.
Divine skepticism: the films of Robert Bresson