A machine element that permits free motion between moving and fixed parts. Antifrictional bearings are essential to mechanized equipment; they hold or guide moving machine parts and minimize friction and wear.

In its simplest form, a bearing consists of a cylindrical shaft, called a journal, and a mating hole, serving as the bearing proper. Ancient bearings were made of such materials as wood, stone, leather, or bone, and later of metal. It soon became apparent for this type of bearing that a lubricant would reduce both friction and wear and prolong the useful life of the bearing. Petroleum oils and greases are generally used for lubricants, sometimes containing soap and solid lubricants such as graphite or molybdenum disulfide, talc, and similar substances.

The greatest single advance in the development of improved bearing materials took place in 1839, when I. Babbitt obtained a United States patent for a bearing metal with a special alloy. This alloy, largely tin, contained small amounts of antimony, copper, and lead. This and similar materials have made excellent bearings. They have a silvery appearance and are generally described as white metals or as Babbitt metals.

Some of the most successful heavy-duty bearing metals are now made of several distinct compositions combined in one bearing. This approach is based on the widely accepted theory of friction, which is that the best possible bearing material would be one which is fairly hard and resistant but which has an overlay of a soft metal that is easily deformed. Figure 1 shows bearings in which graphite, carbon, plastic, and rubber have been incorporated into a number of designs illustrating some of the material combinations that are presently available. 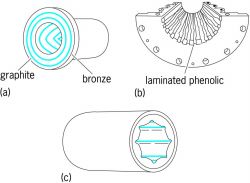 Bearings with (a) graphite; (b) wood, plastic, and nylon

Rubber has proved to be a surprisingly good bearing material, especially under circumstances in which abrasives may be present in the lubricant. The rubber used is a tough resilient compound similar in texture to that in an automobile tire. Cast iron is one of the oldest bearing materials. It is still used where the duty is relatively light.

Porous metal bearings are frequently used when plain metal bearings are impractical because of lack of space or inaccessibility for lubrication. These bearings have voids of 16–36% of the volume of the bearing. These voids are filled with a lubricant by a vacuum technique. During operation they supply a limited amount of lubricant to the sliding surface between the journal and the bearing. In general, these bearings are satisfactory for light loads and moderate speeds.

The method of supplying the lubricant and the quantity of lubricant which is fed to the bearing by the supplying device will often be the greatest factor in establishing performance characteristics of the bearing. For example, if no lubricant is present, the journal and bearing will rub against each other in the dry state. Both friction and wear will be relatively high. The coefficient of friction of a steel shaft rubbing in a bronze bearing, for example, may be about 0.3 for the dry state. If lubricant is present even in small quantities, the surfaces hydrodynamic pressure in film become contaminated by this material whether it be an oil or a fat, and depending upon its chemical composition the coefficient of friction may be reduced to about 0.1. Now if an abundance of lubricant is fed to the bearing so that there is an excess flowing out of the bearing, it is possible to develop a self-generating pressure film in the clearance space as indicated in Fig. 2. These pressures can be sufficient to sustain a considerable load and to keep the rubbing surfaces of the bearing separated. The types of oiling devices that usually result in insufficient feed to generate a complete fluid film are, for example, oil cans, drop-feed oilers, waste-packed bearings, and wick and felt feeders. Oiling schemes that provide an abundance of lubrication are oil rings, bath lubrication, and forced-feed circulating supply systems. The coefficient of friction for a bearing with a complete fluid film may be as low as 0.001.

If the bearing surfaces can be kept separated, the lubricant no longer needs an oiliness agent. As a consequence, many extreme applications are presently found in which fluid-film bearings operate with lubricants consisting of water, highly corrosive acids, molten metals, gasoline, steam, liquid refrigerants, mercury, gases, and so on. The self-generation of pressure in such a bearing takes place no matter what lubricant is used, but the maximum pressure that is generated depends upon the viscosity of the lubricant. Thus, for example, the maximum load-carrying capacity of a gas-lubricated bearing is much lower than that of a liquid-lubricated bearing. The ratio of capacities is in direct proportion to the viscosity. Gas is the only presently known lubricant that can be used for operation at extreme temperatures. Because the viscosity of gas is so low, the friction generated in the bearing is correspondingly of a very low order. Thus gaslubricated machines can be operated at extremely high speeds because there is no serious problem in keeping the bearings cool.

The self-generating pressure principle is applied equally as well to thrust bearings as it is to journal bearings. The tiltingpad type of thrust bearing (Fig. 3a) excels in low friction and in reliability. A typical commercial tthrust bearing (Fig. 3b) is made up of many tilting pads located in a circular position. One of the largest is on a hydraulic turbine at the Grand Coulee Dam. There, a bearing 96 in. (2.4 m) in diameter carries a load of 2,150,000 lb (9,560,000 newtons) with a coefficient of friction of about 0.0009. 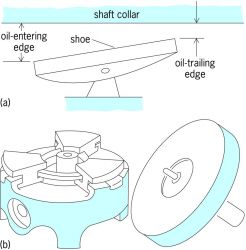 Sleeve bearings of the self-generating pressure type, after being brought up to speed, operate with a high degree of efficiency and reliability. However, when the rotational speed of the journal is too low to maintain a complete fluid film, or when starting, stopping, or reversing, the oil film is ruptured, friction increases, and wear of the bearing accelerates. This condition can be eliminated by introducing high-pressure oil to the area between the bottom of the journal and the bearing itself, as shown schematically in Fig. 4. If the pressure and quantity of flow are in the correct proportions, the shaft will be raised and supported by an oil-film whether it is rotating or not. Friction drag may drop to one-tenth of its original value or even less, and in certain kinds of heavy rotational equipment in which available torque is low, this may mean the difference between starting and not starting. This type of lubrication is called hydrostatic lubrication and, as applied to a journal bearing in the manner indicated, it is called an oil lift. Hydrostatic lubrication in the form of a step bearing has also been used on various machines to carry thrust. 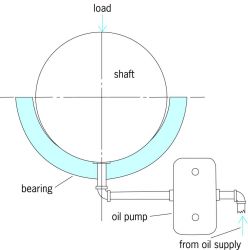 Large structures have been floated successfully on hydrostatic-type bearings. For example, the Hale 200-in. (5-m) telescope on Palomar Mountain (California Institute of Technology/Palomar Observatory) weighs about 1,000,000 lb (450,000 kg); yet the coefficient of friction for the entire supporting system, because of the hydrostatic-type bearing, is less than 0.000004. The power required is extremely small and a 1/12-hp (62-W) clock motor rotates the telescope while observations are being made.

Everyday experiences demonstrate that rolling resistance is much less than sliding resistance. This principle is used in the rolling-element bearing which has found wide use. In the development of the automobile, ball and roller bearings were found to be ideal for many applications, and today they are widely used in almost every kind of machinery.

These bearings are characterized by balls or cylinders confined between outer and inner rings. The balls or rollers are usually spaced uniformly by a cage or separator. The rolling elements are the most important because they transmit the loads from the moving parts of the machine to the stationary supports. Balls are uniformly spherical, but the rollers may be straight cylinders, or they may be barrel- or cone-shaped or of other forms, depending upon the purpose of the design. The rings, called the races, supply smooth, hard, accurate surfaces for the balls or rollers to roll on. Some types of ball and roller bearings are made without separators. In other types there is only the inner or the outer ring, and the rollers operate directly upon a suitably hardened and ground shaft or housing. Figure 5 shows a typical deep-grooved ball bearing, with the parts that are generally used. These bearings may be classified by function into three groups: radial, thrust, and angular-contact bearings. Radial bearings are designed principally to carry a load in a direction perpendicular to the axis of rotation. However, some radial bearings, such as the deep-grooved bearings shown in Fig. 5, are also capable of carrying a thrust load, that is, a load parallel to the axis of rotation and tending to push the shaft in the axial direction. Some bearings, however, are designed to carry only thrust loads. Angular-contact bearings are especially designed and manufactured to carry heavy thrust loads and also radial loads.

A unique feature of rolling-element bearings is that their useful life is not determined by wear but by fatigue of the operating surfaces under the repeated stresses of normal use. Fatigue failure, which occurs as a progressive flaking or sifting of the surfaces of the races and rolling elements, is accepted as the basic reason for the termination of the useful life of such a bearing.

Any bearing having the capability of reducing friction effectively.
McGraw-Hill Dictionary of Architecture and Construction. Copyright © 2003 by McGraw-Hill Companies, Inc.

Feedback
Flashcards & Bookmarks ?
Please log in or register to use Flashcards and Bookmarks. You can also log in with
Flashcards ?
My bookmarks ?
+ Add current page to bookmarks
Mentioned in ?
References in periodicals archive ?
The teeth are driven by a combination of a polygon on the input shaft and, on the output side, a segmented antifriction bearing and a tooth carrier with segmented outer bearing ring.
The winner of the 2015 Hermes Award goes to...
To prevent the overheating during the grinding process there are made milers mill equipped with internal water cooling system consisting in a cold water that enters through a pipe, then passes through the rolling / antifriction bearing cases, and passing through several nozzles, finally sprays the inner wall of the roller mill (http:://www.buhlergroup.com., 2011).
Thermovision predictive maintenance for large capacity milling process in food industry
35[degrees]C to 10[degrees]C (subject to operating limits) Shaft Speed 1,800 to 3,600 rpm 5 Driver Hermetic Motor 6 Lubrication Oil Synthetic Oil PAG Oil Supply Integrated Pump 7 Temperature Control Liquid Injection 8 Bearing Antifriction Bearing for Shaft Support Hydrodynamic Bearing for Orbiting Scroll 9 Scroll Wrap Asymmetric
Ammonia's future
One of its longer runs involves boring pillow blocks - antifriction bearing housings used extensively in the construction of conveyor lines.
Manual pallet changers aren't just for short-runs
Thus the drive shaft moves back and forth as required on a linear antifriction bearing. This version provides acceleration rates to 20 g and displacements to 8.6 inches.
Linear induction motors use copper
A vibration signature taken from an appropriate location in a machine can reveal the presence of the following machine defects: Imbalance, misalignment, imperfect foundation, mechanical looseness, rubs, antifriction bearing defects, faults in belt drive, faults in gears, sleeve bearing looseness, oil whirl, blades/vanes defects, local resonances, etc.
Machine tools vibration fault diagnosis
The results of vibration displacement measurement for the driving rotor shaft II show that antifriction bearing support has low radial and axial stiffness and large mechanical looseness.
Modeling and diagnostics of the gear power transmissions/ Krumpliniu pavaru modeliavimas ir diagnostika