Permanently embryonic tissue involved in cell division at the apices of plant roots and stems, and forming dynamic regions of growth. These apical meri­stems, usually consisting of small, densely cytoplasmic cells, become established during embryo development. Thereafter they divide, producing the primary plant body of root and shoot. Below the apical meristems, tissue differentiation begins: the protoderm gives rise to the epidermal system, the procambium to the primary vascular system, and the ground meristem to the pith and cortex (see illustration). Plant apical meristems have been the object of experiments on development similar to those carried out on animal embryos. 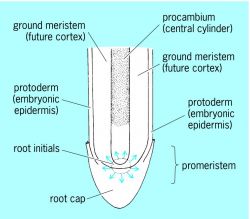 Diagram of a root apical meristem

Root apical meristem is covered by a root cap, a region of parenchymatous, cells which has a protective function and is responsible for perceiving gravitational changes. Root tips have been shown to possess a central region, usually hemispherical, which consists of cells which rarely divide or synthesize deoxyribonucleic acid (DNA), and have less ribonucleic acid (RNA) and protein than adjacent cells; this region is known as the quiescent center. The cells which divide and give rise to root tissues lie around the periphery of this region. Cells in the quiescent center are regarded as cells that are mitotically young and genetically sound; they can renew the initial cells from time to time.

Shoot apices vary greatly in size and shape. The diameter can vary from about 50 micrometers to 0.14 in. (3.5 mm); the shape may be elongated and conical, dome-shaped, flat, or even slightly concave. The distance from the center of the apex to the youngest leaf primordium also varies considerably. Apices increase in size during the development of a single plant; for example, the apical meristem of flax (Linum usitatissimum) increases in area 20-fold from the seedling up to the time of flowering. Apices may also change in size during the time between the formation of one leaf primordium and the next. A single apical cell is present in shoot apices of bryophytes and vascular cryptogams; however, surrounding cells are also mitotically active, and these plants have multicellular apical meristems. In flowering plants, the outer layer or layers of cells (tunica) may divide predominantly by walls at right angles to the surface; the inner tissue (corpus), in less regular planes. Regions of the apical meristem may react differently to certain stains, reflecting so-called cytohistological zonation.

Cells in the central terminal region of the vegetative shoot apex divide less actively than those on the flanks or at the periphery, where leaf and bud primordia are formed. Various surgical experiments, involving incision of the apical meristem, have shown that new apices can be regenerated from portions of the flank. Excised apical meristems, devoid of leaf primordia, can be successfully grown on agar nutrient medium, in the presence of auxin, and will eventually yield new plants. See Bud, Leaf

[′ap·i·kəl ′mer·ə‚stem]
(botany)
A region of embryonic tissue occurring at the tips of roots and stems. Also known as promeristem.
McGraw-Hill Dictionary of Scientific & Technical Terms, 6E, Copyright © 2003 by The McGraw-Hill Companies, Inc.

Feedback
Flashcards & Bookmarks ?
Please log in or register to use Flashcards and Bookmarks. You can also log in with
Flashcards ?
My bookmarks ?
+ Add current page to bookmarks
Mentioned in ?
References in periodicals archive ?
In Chamaedorea cataractarum Mart., the anisotomous division of the apical meristem occurred very early in development, and as the stems matured, the division appeared to be equal (Fisher, 1973).
Review of Vegetative Branching in the Palms (Arecaceae)
Similarly, tomato FIN, whose loss-of-function mutants show fasciated flowers associated with enlarged shoot apical meristems, has also been proved to be an HPAT family protein.
Exploring peptide hormones in plants: identification of four peptide hormone-receptor pairs and two post-translational modification enzymes
Zhang, "Ectopic expression of TaYAB1, a member of YABBY gene family in wheat, causes the partial abaxialization of the adaxial epidermises of leaves and arrests the development of shoot apical meristem in Arabidopsis," Plant Science, vol.
The YABBY Genes of Leaf and Leaf-Like Organ Polarity in Leafless Plant Monotropa hypopitys
The combinations of BAP and NAA were tested for its effect on apical meristem cultures.
EFFECT OF CULTURE MEDIA AND GROWTH REGULATORS ON IN VITRO PROPAGATION OFCHRYSANTHEMUM INDICUM L
Therefore, it is possible that the longer growth period, to plants deferred for 65 days, enabled more elevation of the apical meristem in relation to the other periods.
Characterization of tillers of piata palisade grass deferred in the fall with varying heights and deferment periods/Caracterizacao de perfilhos de capim-piata diferido no outono com alturas e periodos de diferimento variaveis
longiflorum Number of leaves 4.00[+ or -]0.67 Seedling height (mm) 128.29[+ or -]13.41 Apical meristem 59.07[+ or -]9.33 height (mm) Shoot diameter (mm) 6.56[+ or -]0.98 Underground structure 113.95[+ or -]18.23 length (mm) Underground structure 24.54[+ or -]1.14 diameter (mm) Height of the first 29.30[+ or -]11.44 leaf insertion (mm) Aerial dry mass (mg) 1 179.76[+ or -]156.52 Underground dry mass 6 145.10[+ or -]277.16 (mg) Seedling dry mass 7 324.86[+ or -]331.90 (mg) Underground/aerial 5.09[+ or -]0.64 dry mass ratio Aerial/seedling mass 0.16[+ or -]0.02 ratio Measurement (unity) P.
Seed germination and seedling growth of two Pseudobombax species (Malvaceae) with contrasting habitats from Brazilian Cerrado
In this particular instance the presence of the endophyte in the host's apical meristems has not been demonstrated (Kuijt, 1960).
Isophasic parasitism in Phoradendron perredactum (Viscaceae)
Future studies should examine whether this behavior varies across species that inhabit algal hosts with different growth patterns--for example, those with apical meristems such as species from the genus Sargassum.
Nest-building behavior by the amphipod Peramphithoe femorata (Kroyer) on the kelp Macrocystis pyrifera (linnaeus) c. agardh from northern-central Chile
Apical meristem showed higher shoot regeneration potential compared to cotyledon leaf explants.
In vitro shoot regeneration of fenugreek (Trigonella foenumgraceum L.)
A longitudinal section through a typical dicot stem reveals a dome of tissue at the apex, the apical meristem itself, flanked by lateral protrusions that eventually become leaves.
Chapter 7: Growth: cells to tissue
He then examines the patterning of plant components in detail, describing the patterning of the angiosperm embryo, the shoot apical meristem, the patterning of roots, the vegetative shoot and transition to flowering, the angiosperm leaf and the patterning of flowers and their members.
Plant patterning; structural and molecular genetic aspects
As explained in Barthelemy and Caraglio (2007), organogenesis results from the functioning of undifferentiated cells constituting the apical meristem and located at the tip of axes.
Generating functions of stochastic L-systems and application to models of plant development