apricot [Arabic from Lat.,=early ripe], tree, Prunus armeniaca, and its fruit, of the plum genus of the family Rosaceae (rose family), native to temperate Asia and long cultivated in Armenia. The fruit is used raw, canned, preserved, and dried. California is the chief place of cultivation in the United States, although by selecting suitable varieties the apricot can be grown in most regions where the peach is hardy. Apricots are used in the making of a cordial and also for apricot brandy. A number of apricot-plum hybrids, such as the plumcot, Pluot, and Aprium, have been developed. Apricots are classified in the division Magnoliophyta, class Magnoliopsida, order Rosales, family Rosaceae.
The Columbia Electronic Encyclopedia™ Copyright © 2022, Columbia University Press. Licensed from Columbia University Press. All rights reserved. 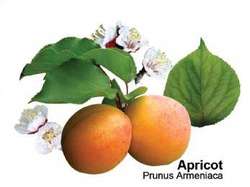 High fiber, beta carotene, Vitamin A, C, E, K, B6, Lycopene, potassium, manganese, iron, phosphorus. The kernel is great for prostate, parasites and cancer, because it has vitamin B17 like apple seeds. But only eat a few at a time, don’t go crazy.
Edible Plant Guide © 2012 Markus Rothkranz
The following article is from The Great Soviet Encyclopedia (1979). It might be outdated or ideologically biased.

Feedback
Flashcards & Bookmarks ?
Please log in or register to use Flashcards and Bookmarks. You can also log in with
Flashcards ?
My bookmarks ?
+ Add current page to bookmarks
Mentioned in ?
References in periodicals archive ?
(2001), who found an average ETc of 1.95mm/day for well watered apricot trees. Note that for 2002 the ETc values corresponding to FAO methodology were higher than the corresponding NP and MCP values.
Estimating evapotranspiration by capacitance and neutron probes in a drip-irrigated apricot orchard/Estimacion de la evapotranspirapacion por capacitancia y sondas neutronicas en una plantacion de albaricoque irrigada por goteo/Estimacao da evapotraspiracao por capacitancia e sondas neutronicas em uma plantacao de damasco irrigada por goteejamento
The local villagers grow apple and apricot trees and plant tomatoes and onions.
Why reverting to the karez system might save Balochistan's water and drought crisis
The villages of Booni, Mastuj, Khot, Garam Chashma, Oveer, Terich, Laspur, Awi-Dumadumi, Nogram, Karimabad and scores of other villages are known for their spectacular autumn colours where poplar, chinar, mulberry and apricot trees are in high density, making the yellow colour predominant.
Chitral awaits tourists to enjoy its autumn colours
They ride through the many springs, the landscape dotted with almond, cherry and apricot trees and experience the magic of Palestine off the beaten track.
Cycling is the 'best way to explore Palestine'
Nakhal, May.05 (ONA) Farmers in these days in Wadi Mastal in the Wilayat of Nakhal in the Governorate of South Al Batinah, are harvesting the fruits of apricot trees and mountain berries in the various villages of the valley that host various types of agricultural crop, whether in the mountains or the green oases that are frequented by tourists and visitors.
Agricultural Crops in Mastal Valley
Abu Ali wants to return to his land as soon as possible, saying: "Of course I will plant my land as I had always done." It was difficult to make Abu Ali smile, but when he was asked if he missed his trees, he did, saying "I miss the walnut and apricot trees...
A farmer from Douma: "I miss my farm. Trees are like kids."
Hidden potential is ready to burst out everywhere, whether it's blossoms on the apricot trees or the sparkling ambitions of new college graduates.
And the Award Goes to ..
apricot trees will generally produce fruit for 20-25 years.
Fab facts: Did you know
These lots are mostly planted with cherry and apricot trees, which used to be a source of income.
Arsal landowners allowed to check on their farms
Every day I would see something new that totally blew my mind; fantastical trucks with psychedelic patterns, fresh snow upon the Lady Finger peak, forts and orchards of apricot trees. Everywhere I turned, I was greeted with incredible enthusiasm and hospitality; Pakistan, it turned out, was not a dangerous country at all.
Backpacking Through Pakistan
It was the season when the apricot trees were in bloom and the water from the melting of the glaciers irrigated the valley.
Pakistan's tourism industry gradually recovering: Article
Almond, plum and apricot trees which blossomed due to hot and sunny weather condition stayed under a white layer.
Snow covers blossomed trees in central Turkey