(ar -mă-lair-ee) A device, dating back to antiquity, composed of a set of graduated rings representing circles on the celestial sphere, such as the ecliptic, celestial equator, and colures. The whole globe often revolved about an axis – the polar axis – within horizon and meridian circles. Movable sighting adjustments enabled a star to be observed and its coordinates to be read off the relevant circles.
Collins Dictionary of Astronomy © Market House Books Ltd, 2006 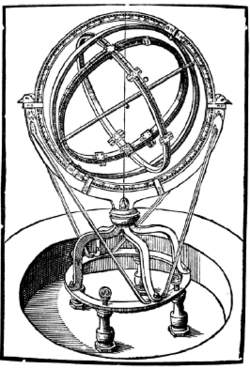 An illustration of the type of armillary sphere used by the great scientist Tycho Brahe. Reproduced by permission of Fortean Picture Library.

An armillary (from Latin word armilla, meaning “bracelet”) sphere is a skeletal sphere consisting of rings that represent the more important celestial circles utilized by astrologers—the ecliptic, the meridian, the horizon, the celestial equator, etc.

Feedback
Flashcards & Bookmarks ?
Please log in or register to use Flashcards and Bookmarks. You can also log in with
Flashcards ?
My bookmarks ?
+ Add current page to bookmarks
Mentioned in ?
References in periodicals archive ?
While the nature of the instrument is as yet unclear, it appears to have been an instrument having the same applications as the armillary sphere. (51)
Wlodarczyk, "Observing with the Armillary Sphere," Journal for the History of Astronomy 18 (1987): 177, 182.
This gives the impression that the accuracy of Yahya's azimuth circle was that of a typical armillary sphere, like the very model used by him.
Ghazan Khan's astronomical innovations at Maragha observatory
For the first number of Abstraction-Creation, Art Non-Figuratif in 1932, Calder prepared a statement to accompany a reproduction of Little Universe, an open wire orb resembling an armillary sphere:
The engineer behind Calder's art
Although the sky rolls forward unassisted by hydrodynamic propulsion, about 2,000 years ago, during China's Later, or Eastern, Han dynasty (AD 23-220), a renowned and innovative astronomer, Zhang Heng, coupled a water clock with an armillary sphere to drive that instrument at the diurnal rate.
By the era of Zhang (AD 78-139), the armillary was fully developed, and the oldest surviving account of it is Zhang's Illustrated Commentary on the Armillary Sphere. His description details the rings and references fundamental positions in the sky.
Zhang's manuscript on the water-driven clock drive, Apparatus for Rotating an Armillary Sphere by Clepsydra Water, is now known only from quotations by later scholars, but they confirm that his armillary was designed to track the Seven Luminaries (Sun, Moon, and the five planets visible to the unaided eye), seasonally significant events, and the times of dawn and dusk, and to verify their proper coordination with the calendar.
Fluid Drive: like liquid perfection, an ancient art of timekeeping flows into high gear
The armillary sphere is an ancient astronomical device used to illustrate the old geocentric universe (the "world" in the parlance of the day), and is a most fascinating device, both in its historical roots and mechanically.
The term "armillary sphere" would literally denote a sphere made of rings (armillaries), but its usage has been to refer to the astronomical device, so I stick with that when I use the term.
Letters