(redirected from as high as a kite)
Also found in: Dictionary, Thesaurus, Financial, Idioms.

in aviation, aircraft restrained by a towline and deriving its lift from the aerodynamic action of the wind flowing across it. Commonly the kite consists of a light framework upon which paper, silk, or other thin material is stretched. Kites having one plane surface require flexible tails for lateral and directional stability. Kite making has been popular in China and other East Asian countries for centuries. It is thought that the first use of kites to secure meteorological information was made by Alexander Wilson of Scotland, who in 1749 used them to carry thermometers aloft. In 1752, Benjamin Franklin used kites to study lightning. The box kite was invented c.1893 by Lawrence Hargrave, an Australian, and was used effectively in meteorological and aerodynamic studies. The tetrahedral kite was used by Alexander Graham Bell for making experiments on problems of airplane construction.

in zoology, common name for a bird of the family Accipitridae, which also includes the hawkhawk,
name generally applied to the smaller members of the Accipitridae, a heterogeneous family of diurnal birds of prey, such as the eagle, the kite, and the Old World vulture.
..... Click the link for more information. . Kites are found near water and marshes in warm parts of the world. They prey chiefly on reptiles, frogs, and insects. The swallow-tailed, white-tailed, and Mississippi kites are found in the Gulf states and in Central and South America. The snail kite, Rostrhamus sociabilis, feeds exclusively on a large freshwater snail. The common kite of England, now rare, was once a scavenger in the streets of London. Kites are classified in the phylum ChordataChordata
, phylum of animals having a notochord, or dorsal stiffening rod, as the chief internal skeletal support at some stage of their development. Most chordates are vertebrates (animals with backbones), but the phylum also includes some small marine invertebrate animals.
..... Click the link for more information. , subphylum Vertebrata, class Aves, order Accipitriformes, family Accipitridae.
The Columbia Electronic Encyclopedia™ Copyright © 2013, Columbia University Press. Licensed from Columbia University Press. All rights reserved. www.cc.columbia.edu/cu/cup/

A kite is a configuration in which one of the planets in a grand trine opposes a fourth planet that simultaneously forms sextile aspects (60° angles) with the remaining two planets. This is considered a fortunate configuration in a natal chart: Depending on the indications of the balance of the chart, a grand trine can be too fortunate, bringing the native good luck but not challenging the person to develop character. The inclusion of an opposed fourth planet adds an element of challenge and tension that stimulates the native to release the energies of the grand trine in a dynamic manner. The house position of the fourth planet usually indicates the area of life in which this release will occur.

a captive aircraft that is supported in the air by the pressure of the wind on its surface, which is set at a certain angle to the direction of the wind and is restrained by a line from the ground. The main structural members of a kite (see Figure 1) are a supporting (aerodynamic) surface made of

Figure 1. Diagram ot the layout of a kite and of the forces acting on it: (AB) aerodynamic surface, (α) angle of attack, (E) knot or point of attachment of tine, (EA) and (ED) fetters that form the bridle, (g) center of gravity, (C) center of sailing, (O) pole (center of application of forces), (V) wind speed

fabric or paper and stretched over a rigid frame, a line (a hemp rope, steel cable, or strong string) wound onto a winch or spool, a bridle for attaching the line to the kite, and stabilizing members. Longitudinal stability is ensured by the tail or by the shape of the aerodynamic surface; transverse stability is provided by the pitching planes, which are mounted parallel to the guide line, or by the curvature and symmetry of the aerodynamic surface. The inflight stability of a kite also depends on the location of its center of gravity.

The forces acting on the kite in flight are the force of gravity P and the force of wind pressure on the kite’s surface R, the vector sum of which is the thrust T̄’, and the stretching force of the string T̄ (see Figure 1). In a state of equilibrium the thrust T̄’ is balanced by the stretching force of the string T̄, and the sum of the moments of the forces P̄E and R̄E (with respect to the junction E of the kite) is equal to zero.

Depending on the shape and arrangement of the aerodynamic surfaces, a distinction is made among bow kites (Figure 2); multisurface kites, such as “bookcase,” box, and multicell kites, which consist of individual cells in the form of 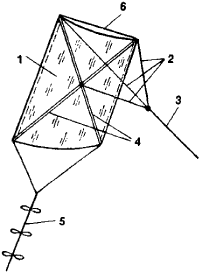 tetrahedrons or parallelepipeds; and sectional, or compound, kites, which consist of a group of kites (a so-called kite train) connected into a single flexible system. At the turn of the 20th century, kites were used for the meteorological study of the upper layers of the atmosphere, for photographing the terrain, and for sports. As lighter-than-air and other aircraft developed, kites began to be used exclusively for sports.

1. Nautical any of various light sails set in addition to the working sails of a vessel
2. any diurnal bird of prey of the genera Milvus, Elanus, etc., typically having a long forked tail and long broad wings and usually preying on small mammals and insects: family Accipitridae (hawks, etc.)
3. Commerce a negotiable paper drawn without any actual transaction or assets and designed to obtain money on credit, give an impression of affluence, etc.
www.kiteflyers.org
Collins Discovery Encyclopedia, 1st edition © HarperCollins Publishers 2005

(dreams)
The message that is coming up from your unconscious mind may be one of renewed freedom or an accomplishment of a goal. Kites are generally associated with sweet childhood memories and a sense of abandonment in joy. If your daily life is difficult, this dream may be a form of compensation, or it may be a positive anticipation of things to come.
Bedside Dream Dictionary by Silvana Amar Copyright © 2007 by Skyhorse Publishing, Inc.