perennial garden vegetable (Asparagus officinalis) of the family Liliaceae (lilylily,
common name for the Liliaceae, a plant family numbering several thousand species of as many as 300 genera, widely distributed over the earth and particularly abundant in warm temperate and tropical regions.
..... Click the link for more information.  family), native to the E Mediterranean area and now naturalized over much of the world. As in the other species of this Old World genus of succulent plants, the stems are green and function as leaves, while the leaves themselves are reduced to small scales. The tender shoots of asparagus are cut and eaten in the spring. It grows wild in the salt marshes of Europe and Asia, where it has also been under cultivation from antiquity. In early times it was regarded as a panacea. Cato in his On Farming gave directions for growing asparagus similar to those in a modern manual of agriculture. The San Joaquin valley is the main asparagus-growing area of the United States; over half the crop is processed, i.e., canned or frozen. The feathery sprays of the mature garden asparagus are sometimes used by florists, but more popular for decorative purposes are other plants of the same genus—the asparagus fern (A. plumosus, not a true fern) and the florists' smilax (A. asparagoides), both climbing vines native to S Africa. The wild smilax, usually called greenbrier, belongs to the genus Smilax. Asparagus is classified in the division MagnoliophytaMagnoliophyta
, division of the plant kingdom consisting of those organisms commonly called the flowering plants, or angiosperms. The angiosperms have leaves, stems, and roots, and vascular, or conducting, tissue (xylem and phloem).
..... Click the link for more information. , class Liliopsida, order Liliales, family Liliaceae.
The Columbia Electronic Encyclopedia™ Copyright © 2013, Columbia University Press. Licensed from Columbia University Press. All rights reserved. www.cc.columbia.edu/cu/cup/ 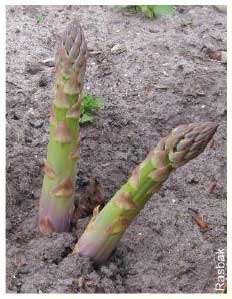 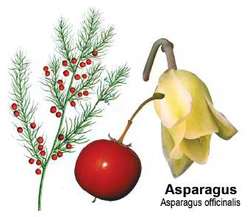 Somehow normal everyday asparagus started spreading wild across the country, so if you see some growing randomly, go for it (eat young ones, not old) There are no poisonous lookalikes, whole plant is edible. What we call asparagus is actually the unopened flower buds. Flowers are small green bell shaped. Tiny fernlike “leaves” with red fruits. Berries start green and turn red. It has pea-sized red or green berries with 3-6 black seeds inside. The stalks can grow 3-5 (1-2m) feet with stems that grow from the main stalk. High in vitamin A, C, calcium, iron, phosphorus, selenium, anti cancer, anti heart disease, excellent kidney stimulant, urinary tract infections, diuretic, gout, has lots of anti-inflammatories, helps convert amino acids into protein. Roots lower blood pressure. Some say if you eat asparagus every day you will never get cancer.
Edible Plant Guide © 2012 Markus Rothkranz
The following article is from The Great Soviet Encyclopedia (1979). It might be outdated or ideologically biased.

a genus of branching perennial herbs, subshrubs, and lianas of the family Liliaceae. The leaves are reduced to scales, whose axils bear greatly modified branchlets, or cladodes. The cladodes are often gathered into bundles, and in some asparagus species phylloclades are observed. The small flowers are for the most part diclinous; the fruit is a berry.

There are about 300 species of asparagus, distributed in the Old World, mainly in arid regions. The USSR has about 30 species. The common, or garden, asparagus (A. officinalis) is of the greatest economic significance. It is a dioecious plant. There are some specimens, however, that bear male flowers on some of the stems and female flowers on others; bisexual flowers may occur along with unisexual ones. The common asparagus grows wild in Western Europe, the Mediterranean region, the Balkans, the European USSR, the Caucasus, and Western Siberia. The plant is cultivated in Western Europe, India, Japan, Northeast China, Algeria, Egypt, the USA, and the USSR. Cultivation of the crop in the USSR is on a small scale and is concentrated in the central and southern zones of the European USSR, the Northern Caucasus, Transcaucasia, and the Crimea.

There are numerous varieties of the common asparagus, which are divided by color into three groups: green-tipped (Snow Head, Spanish), red-tipped (Argenteuil Early and Late are the most common and most productive), and white-tipped (Giant, Mammoth Columbian White).

Asparagus is propagated by seedlings; less frequently a shrub is divided to form new plants. The crop grows well on loose, fertile soils that have been treated with organic fertilizers (60–80 tons/ ha). The first stalks are harvested in the third season; the plantations are used until they are ten to 15 years old. Harvesting takes place in early spring. The aboveground stalks are cut, and the underground stalks are dug up and cut above the root collar (crown). The average yield is 30–35 quintals/ha. During the winter asparagus is raised in hothouses, hotbeds, and cellars from two-or three-year-old rhizomes stored since autumn.

In Japan the species A. colchinchinensis is cultivated. Candy is made from the tubers, and the plant is also used medicinally. A number of asparagus species, including the asparagus fern (A. plumosus) and A. sprengeri, are often cultivated as ornamentals.

[ə′spar·ə·gəs]
(botany)
Asparagus officinalis. A dioecious, perennial monocot belonging to the order Liliales; the shoot of the plant is edible.
McGraw-Hill Dictionary of Scientific & Technical Terms, 6E, Copyright © 2003 by The McGraw-Hill Companies, Inc.

1. any Eurasian liliaceous plant of the genus Asparagus, esp the widely cultivated A. officinalis, having small scaly or needle-like leaves
2. the succulent young shoots of A. officinalis, which may be cooked and eaten
3. asparagus fern a fernlike species of asparagus, A. plumosus, native to southern Africa
Collins Discovery Encyclopedia, 1st edition © HarperCollins Publishers 2005

Feedback
Flashcards & Bookmarks ?
Please log in or register to use Flashcards and Bookmarks. You can also log in with
Flashcards ?
My bookmarks ?
+ Add current page to bookmarks
Mentioned in ?
References in periodicals archive ?
Hussingtree specialise in small runs using a traditional 150 litre alembic copper still, and they had initially anticipated this Asparagus Gin to be a short batch of a few hundred bottles.
Another perfect combo for your asparagus?
New season asparagus tends to be more tender and sweeter than the thicker, woodier stems you get earlier in the year.
ONE-PAN SALMON WITH ROAST ASPARAGUS; FOOD
WYE VALLEY WHITE ASPARAGUS WITH A POACHED DUCK'S EGG SERVES 4-6 INGREDIENTS PS 20 medium sized white asparagus tips PS 4 duck or hens eggs PS 60g unsalted butter PS 2tbsp chopped parsley PS The juice of a lemon PS Half a tablespoon of granulated sugar PS Salt and freshly ground black pepper PS To prepare the asparagus cut about 2-3cm of the woody base of the asparagus, if it looks like they are very woody cut a little more off.
Unlock the hidden potential of white asparagus; Our resident chef tells you how to get the most out this ghostly veg
When melted and starting to bubble, add the asparagus and cook for about three minutes until it softens and starts to collapse.
starters; Crab and asparagus
After it's gone, it's back to the less superior imported asparagus, which has racked up plenty of air miles.
Lift up your spears
"Until St John's, don't forget this, you have seven weeks to eat asparagus," according to yet another old proverb.
The Germans' annual obsession with asparagus
Freeze dried asparagus samples (5 g) were homogenized and extracted in 70 ml of 60% ethanol for 2 h at room temperature according to KOBUS-CISOWSKA and coworkers (2019) with slight modifications.
Composition of polyphenols of asparagus spears (Asparagus officinalis) and their antioxidant potential/A composicao dos polifenois das espargos (Asparagus officinalis) e o seu potencial antioxidante
I say this to encourage you to try different ways of serving asparagus to your family, especially if they aren't huge vegetable-lovers.
How to make asparagus sing? Mustard, soy sauce and honey
In Germany, the harvest season for white asparagus starts in April, after the last snow of winter has melted and the sun begins to spread its warmth.
White asparagus indulgence at Marco Polo Hong Kong
The Scottish asparagus season is very short, only lasting around six weeks, so as soon as it hits the shelves, I start cooking with it.
Ingredient of the Week; Fresh Asparagus; by Jak O'Donnell Scottish chef and patron of the Sisters Restaurant, Glasgow
"A major highlight of springtime in Germany is Spargelzeit, or Asparagus Season.
Celebrating asparagus