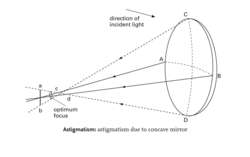 Feedback
Flashcards & Bookmarks ?
Please log in or register to use Flashcards and Bookmarks. You can also log in with
Flashcards ?
My bookmarks ?
+ Add current page to bookmarks
Mentioned in ?
References in periodicals archive ?
Frown and chevron incisions lie entirely within the funnel and are astigmatically more stable.
DISCUSSION: Today's cataract incisions provide better control of surgically induced astigmatism, either by using temporal approach to produce astigmatically neutral surgery or by using on axis incision to induce astigmatism at the steep axis to counteract preexisting astigmatism.
A comparative study of surgically induced astigmatism in frown versus chevron incision in manual small incision cataract surgery
Finally, small, temporal, clear corneal incisions are astigmatically neutral and stabilize quickly.
Safety and benefit of simultaneous bilateral cataract surgery in tertiary care centre