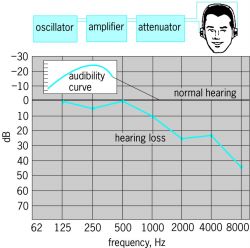 Feedback
Flashcards & Bookmarks ?
Please log in or register to use Flashcards and Bookmarks. You can also log in with
Flashcards ?
My bookmarks ?
+ Add current page to bookmarks
Mentioned in ?
References in periodicals archive ?
Practice audiometers and sample hearing protectors for fitting exercises are dispensed and made available to course participants.
Calibration of audiometer and requirements for test booths
Workplace INTEGRA Offering CAOHC Courses in a Number of States
Maico Diagnostics, in the audiometric business for more than 60 years, offers the MA 27 audiometer model.
Audiometer
The Association for Children with Language, Speech and Hearing Impairments of Namibia (CLaSH) recently donated a screening audiometer valued at N$11400 to the St Mary Catholic Hospital in Rehoboth to aid screening efforts and early identification of children with hearing impairments in the district.
ClaSH donates to hospital