A theory concerned with models (automata) used to simulate objects and processes such as computers, digital circuits, nervous systems, cellular growth, and reproduction. Automata theory helps engineers design and analyze digital circuits which are parts of computers, telephone systems, or control systems. It uses ideas and methods of discrete mathematics to determine the limits of computational power for models of existing and future computers. Among many known applications of finite automata are lexical analyzers and hardware controllers.

The concept now known as the automaton was first examined by A. M. Turing in 1936 for the study of limits of human ability to solve mathematical problems in formal ways. His automaton, the Turing machine, is too powerful for simulation of many systems. Therefore, some more appropriate models were introduced.

The Turing machine is a suitable model for the computational power of a computer. A Turing machine has two main parts: a finite-state machine with a head, and a tape (see illustration). The tape is infinite in both directions and is divided into squares. The head sees at any moment of time one square of the tape and is able to read the content of the square as well as to write on the square. The finite-state machine is in one of its states. Each square of the tape holds exactly one of the symbols, also called input symbols or machine characters. It is assumed that one of the input symbols is a special one, the blank, denoted by B. 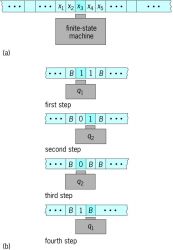 At any moment of time, the machine, being in one of its states and looking at one of the input symbols in some square, may act or halt. The action means that, in the next moment of time, the machine erases the old input symbol and writes a new input symbol on the same square (it may be the same symbol as before, or a new symbol; if the old one was not B and the new one is B, the machine is said to erase the old symbol), changes the state to a new one (again, it is possible that the new state will be equal to the old one), and finally moves the head one square to the left, or one square to the right, or stays on the same square as before.

For some pairs of states and input symbols the action is not specified in the description of a Turing machine; thus the machine halts. In this case, symbols remaining on the tape form the output, corresponding to the original input, or more precisely, to the input string (or sequence) of input symbols. A sequence of actions, followed by a halt, is called a computation. A Turing machine accepts some input string if it halts on it. The set of all accepted strings over all the input symbols is called a language accepted by the Turing machine. Such languages are called recursively enumerable sets.

A computational device with yet smaller capability than that of a linear bounded automaton is a push-down automaton. It consists of a finite-state machine that reads an input symbol from a tape and controls a stack. The stack is a list in which insertions and deletions are possible, both operations taking place at one end, called the top. The device is nondeterministic, so it has a number of choices for each next move. Two types of moves are possible. In the first type, a choice depends on the input symbol, the top element of the stack, and the state of the finite-state machine. The choice consists of selecting a next state of the finite-state machine, removing the top element, leaving the stack without the top element, or replacing the top element by a sequence of symbols. After performing a choice, the input head reads the next input symbol. The other type is similar to the first one, but now the input symbol is not used and the head is not moved, so the automaton controls the stack without reading input symbols. See Abstract data type

automaton
This article is provided by FOLDOC - Free Online Dictionary of Computing (foldoc.org)

An open-ended computer science discipline that concerns an abstract device called an "automaton," which performs a specific computational or recognition function. Networks of automata are designed to mimic human behavior.
Copyright © 1981-2019 by The Computer Language Company Inc. All Rights reserved. THIS DEFINITION IS FOR PERSONAL USE ONLY. All other reproduction is strictly prohibited without permission from the publisher.

Feedback
Flashcards & Bookmarks ?
Please log in or register to use Flashcards and Bookmarks. You can also log in with
Flashcards ?
My bookmarks ?
+ Add current page to bookmarks
Mentioned in ?
References in periodicals archive ?
Automata theory is used to store the discretized scene states where these states are defined as virtual steps or checkpoints that assure that all agents will reach the final formation shape at the same time and so will ensure that communication between agents is intact and that no agent dropped out of the formation.
However, this does not ensure the maintenance of the formation while moving to the goal, so here again automata theory is being used to divide the pathway points unequally but synchronous with the checkpoints of all the members of the formation.
The automata theory provided the hybrid approach with a method to continuously have feedback whether the desired action was performed or not.
In this hybrid approach the rigidity of the automata theory is balanced by combining the allowance (tolerance) of the virtual grid technique with it.
Adaptive group formation in multirobot systems
Then L = [[omega]1[[omega].sup.-1]|[omega] [member of] [[summation].sup.*]} [subset or equal to] [[summation].sup.*] is clearly a context-free language but not a regular language by classical automata theory, where [[omega].sup.-1] represents the reversal of the string [omega].
It follows that the languages accepted by IFPDAs are equivalent to those accepted by [IFPDAs.sup.0] by classical automata theory. Secondly, we have introduced the notions of IFCFGs, IFCNFs, and IFGNFs.
As mentioned in Section 1, IFS and fuzzy automata theory have supported a wealth of important applications in many fields.
Ying, "Quantum logic and automata theory," in Handbook of Quantum Logic and Quantum Structures, K.
Qiu, "Automata theory based on quantum logic: some characterizations," Information and Computation, vol.190, no.
On intuitionistic fuzzy context-free languages
Topics include representations of subgroups and algebras, automata theory, majorization, combinatorics, and the history of mathematics, particularly that of the work of Molien.
Semigroups and automata; selecta, Uno Kaljulaid (1941-1999)