see air navigationair navigation,
science and technology of determining the position of an aircraft with respect to the surface of the earth and accurately maintaining a desired course (see navigation).
..... Click the link for more information. .
The Columbia Electronic Encyclopedia™ Copyright © 2013, Columbia University Press. Licensed from Columbia University Press. All rights reserved. www.cc.columbia.edu/cu/cup/
The following article is from The Great Soviet Encyclopedia (1979). It might be outdated or ideologically biased.

an apparatus for the automatic control of aircraft (such as an airplane, helicopter, flying bomb, or guided missile). The idea and a diagram for an automatic pilot were proposed by K. E. Tsiolkovskii in 1898.

The first airplane controlled by an automatic pilot was demonstrated by the Sperry Company (USA) in a flight at the Paris World’s Fair of 1914. A domestic automatic pilot with a pneumatic actuating system (AVP-1) was developed in 1932. The first automatic pilot was designed to stabilize only the angular moments of an airplane (movements relative to the center of mass), thus making it possible to maintain a specified flying attitude for an airplane without the pilot’s attention. Improvements have made it possible to create an automated system that controls an aircraft not only with respect to its center of mass but also the center of mass itself. This allows all the flight modes of an aircraft to be automated from takeoff to landing. The aircraft’s control surfaces and engines are automatically controlled. Flights can be handled for different types of pilotless craft (such as rockets, guided missiles, and artificial satellites).

An automatic pilot for an airplane consists of a number of automatons that are alike in operating principle (concerning course, pitch, bank, speed, height, and so on) and that operate together to control and stabilize the flight. The sensing unit of each automaton measures a single assigned parameter of the flight position (for example, the height or the course), known as the control parameter, and produces a signal proportional to the current value of the parameter. The setting mechanism for the flight positions produces signals, each of which corresponds to the required value of a specific control parameter. These signals are compared in a computer. Their difference (mismatch), following amplification, is fed to a servo unit of the automatic pilot which deflects the corresponding control surface of the airplane or the control unit by means of a motor. When this position achieves the required value, the mismatch signal disappears, the servo unit stops moving, and an equilibrium position is obtained. Stability can be achieved in an automatic aircraft control system both by using a derivative of the controlled parameters and by negative feedback of appropriate types. In addition to automatons, there are various control and regulating systems in an automatic pilot. Power in the form of electric energy, or air and oil under pressure, obtained from the airplane’s engine, is required to operate an automatic pilot.

[¦ȯd·ə¦mad·ik ′pī·lət]
(navigation)
Also known as autopilot.
Equipment which automatically stabilizes the attitude of an aircraft about its pitch, roll, and yaw axes and keeps it on a predetermined heading.
Equipment for automatically steering ships.
McGraw-Hill Dictionary of Scientific & Technical Terms, 6E, Copyright © 2003 by The McGraw-Hill Companies, Inc.

In a gas burner, a device that will stop the gas supply if the gas flame is extinguished.
McGraw-Hill Dictionary of Architecture and Construction. Copyright © 2003 by McGraw-Hill Companies, Inc. 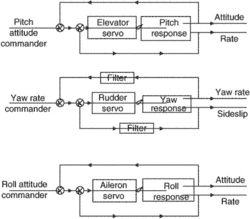 A simple 3-axis autopilot.
That part of an automatic flight control system that provides attitude stabilization, in all three planes, with respect to internal references. It may also permit leveling out at the desired altitude, or rolling out onto the desired heading. However, some autopilot systems have restricted capability in that they bring back aircraft into a wings-level attitude but do not provide any pitch stabilization. In the case of helicopters, autopilot may also provide autohovering capability.
An Illustrated Dictionary of Aviation Copyright © 2005 by The McGraw-Hill Companies, Inc. All rights reserved

Feedback
Flashcards & Bookmarks ?
Please log in or register to use Flashcards and Bookmarks. You can also log in with
Flashcards ?
My bookmarks ?
+ Add current page to bookmarks
Mentioned in ?
References in periodicals archive ?
TNT said of the sackings: "Although the Air Accidents Investigation Branch investigation continues, it has been established that the automatic pilot was disengaged.
Crash land crew axed; DRAMA: Pilot error behind aircraft hitting ground with set of wheels missing
Overall, debate was considered quiet and one senior lawmaker in the ruling bloc remarked that the Diet seemed to be on ''automatic pilot'' with most lawmakers unwilling to get involved in debates or proceedings.
2ND LD: Japanese Diet ends lackluster session
According to the National Aeronautical Laboratory (NAL) and National Space Development Agency of Japan (NASDA), the vehicle flew on a scheduled path after takeoff to successfully land by automatic pilot at 5:50 a.m.
Japan test-flies jet vehicle for own shuttle program
Don't expect the network to go on automatic pilot. No matter what job search strategies you choose, follow-up and record keeping are important for success.
Your career can still thrive in an age of flux. (Which Way Is Up?)
In addition, 74 percent of the officers stated that they responded on "automatic pilot," with little or no conscious thought.
Perceptual and memory distortion during officer-involved shootings. (Research Forum)
Bea Al Nazemian Tim Josh Kornbluth Preacher Thomas Jay Ryan Unlike her fine work in last year's Sundance entry "The Deep End," Tilda Swinton is on automatic pilot and in "icon" rather than "actress" mode in "Treknolust," her second teaming with writer-director Lynn Hershman Leeson after "Conceiving Ada." Though presumably intended as a deadpan parody of stem-cell reproduction, the humor never quite computes in this mannered, rather silly tale of a virginal geek who sublimates her family urge through cyber-science until she finally gets a taste of the flesh-and-blood deal.
Teknolust
Well, one critic with previous directorial experience (a rarity for most scribblers), the Toronto Star's Richard Ouzounian, was rumored to show some aptitude with his staging of a scene from Erika Ritter's Automatic Pilot. And, according to the National Post's John Karastamatis (a critic put the unenviable position of critiquing other critics on that December evening), fellow Post reviewer Robert Cushman's selection was "ravishing to watch." Karastamatis summed up the experiment thusly: "At the end of the evening, the critic-directors were asked to stand.
Beyond the Byline. (Trends & Events)
They didn't the concept of automatic pilot in those riverboat days, but that's what he's on.
A thousand words: Rodney Graham talks about the phonokinetoscope
(It is one thing if someone doesn't remember something said five minutes ago; it is another thing when they do not remember the wall they just saw in front of them two seconds ago.) For a while, the caretaker can depend on the Alzheimer's patient's long-term memory -- their "automatic pilot" -- to keep a kind of sanity and safety in the house.
Intimations of the Great Unlearning: Interreligious Spirituality and the Demise of Consciousness Which Is Alzheimer's
The crash at Toulouse-Blagnac international airport in France on 30 June 1994 killed all seven crew members on board as the manufacturer was testing a new automatic pilot under simulated extreme conditions.
Airbus executives cleared of blame for test flight accident
Philip Coggan, editor of the Financial Times, reported on CNN's In the Money that the market "prefers a divided presidency and Senate." The next day, news of the presidential stalemate had yet to faze the markets, and Bruce Bartlett, an economist at the conservative National Center for Policy Analysis, told viewers that "markets like gridlock, they don't really want to see a lot of legislation coming out of Washington, they like things on automatic pilot." But as the battle for Florida dragged on, the market apparently changed its mind.
The Ficklest Voter
Otherwise it seemed as if Scott was on automatic pilot.
Living: Will the real Mike Scott stand up!; THE WATERBOYS, WULFRUN HALL, WOLVERHAMPTON