[¦ȯd·ō‚rō′tā·shən]
(mechanics)
Rotation about any axis of a body that is symmetrical and exposed to a uniform airstream and maintained only by aerodynamic moments.
Rotation of a stalled symmetrical airfoil parallel to the direction of the wind.
McGraw-Hill Dictionary of Scientific & Technical Terms, 6E, Copyright © 2003 by The McGraw-Hill Companies, Inc. 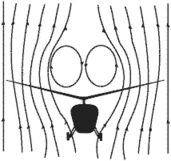 Airflow in auto rotation.
i. A condition in which a rotor of a helicopter is driven solely by the action of air ascending through its blades rather than by engine power. In helicopters, descending with the power off, air flows in the reverse direction upward through the main rotor, causing it to continue rotating at cruising RPM. To maintain the rotor RPM, the helicopter is allowed to descend by lowering the collective lever so that the relative airflow strikes the blade in a manner in which the airflow itself provides the driving force. Under these conditions, the rate of descent becomes the power equivalent, and the helicopter is said to be in a state of autorotation. The angle of descent in an autorotation is very steep. Autorotation landings are practiced to train pilots to enable them to land in case of actual engine failure. Various expressions used by pilots while carrying out autorotations are autorotative landing, touchdown autorotation, or autorotation to touchdown. All these mean that the pilot will land without applying power to the rotor. A 180° autorotation means one initiated from a downwind heading, with a turn into the wind; it commences well inside the normal traffic pattern. Low-level autorotation commences at an altitude well below the traffic pattern, usually below 100 ft AGL (above ground level), and is primarily used for tactical military training.
ii. The rotation of aircraft around its axes resulting from aerodynamic forces. An aircraft in spin autorotates (autorolls, autoyaws, and autopitches) because of aerodynamic forces.
iii. The tendency of an airfoil at high angles of attack to rotate to align with the relative airflow.
An Illustrated Dictionary of Aviation Copyright © 2005 by The McGraw-Hill Companies, Inc. All rights reserved

Feedback
Flashcards & Bookmarks ?
Please log in or register to use Flashcards and Bookmarks. You can also log in with
Flashcards ?
My bookmarks ?
+ Add current page to bookmarks
Mentioned in ?
References in periodicals archive ?
If you autorotate your crippled helicopter into a farm field, we can record your location, get county fire and rescue services rolling and even notify your company office (if we know who to call).
Declaring the big "E"; when the excrement hits the oscillator, ATC is your best friend. How con you help them to help you? start with "Mayday," and then ask for exactly what you need
Canadian investigators have determined that pilots of a Cougar Helicopters S-92 that ditched off the coast of Newfoundland on 12 March had attempted to autorotate the twin-engine heavy helicopter into the icy Atlantic after the tail rotor drive had failed.
Travel Safety Update - North America
Diaspores are (approximately) 22-mg and 22 mm long samara-like winged seeds that autorotate while falling at an average terminal velocity of 0.81 [+ or -] 0.01 m/s, mean [+ or -] 1 SE (Nathan et al.
SPATIOTEMPORAL VARIATION IN SEED DISPERSAL AND RECRUITMENT NEAR AND FAR FROM PINUS HALEPENSIS TREES
If the engines fail completely, you can autorotate and safely land.
Helicopters Hunters, Not Victims