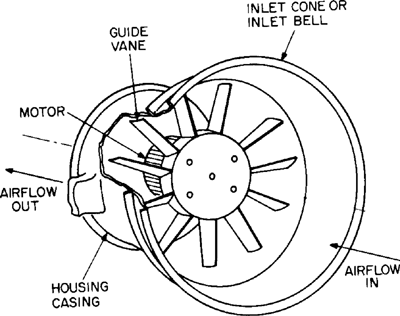 axial-flow fan
1. One of the following types of fans: vaneaxial, tubeaxial, or propeller. Such fans impart energy to the air by giving it a twisting motion. They are specified by blade shape, ratio of hub-to-tip diameter, pitch of the blades, and number of blades. Guide vanes may be added to straighten the flow and increase the efficiency.
2.See centrifugal fan.

Feedback
Flashcards & Bookmarks ?
Please log in or register to use Flashcards and Bookmarks. You can also log in with
Flashcards ?
My bookmarks ?
+ Add current page to bookmarks
TheFreeDictionary presents:
Write what you mean clearly and correctly.
Mentioned in ?
References in periodicals archive ?
The design problem for the axial-flow fan considered in this article involves the determination of the optimal shape of fan blades for the axial-flow fan based on the desired pressure head and volumetric flow rate of the fan.
radius = 0.654 percent chord The design problem for axial-flow fan blade considered involves the determination of the optimal shape of fan blade for the axial-flow fan based on the desired airflow rate.
To optimize the 3D shape of an axial-flow fan blade based on the desired airflow rate, the geometry of the redesigned fan blade has to be generated by using four primary design variables: the blade root attack angle, blade numbers, the blade root chord ([L.sub.r]), and blade end chord ([L.sub.e]) which enables the shape of the fan blade to be calculated by CFD, then the best parameters among the array of parameters in the candidate table for the required design problem can be selected and optimized.
Design and Experiment on Aircraft Electromechanical Actuator Fan at Different Altitudes and Rotational Speeds
Traditional airblast sprayers direct the air from a single axial-flow fan, mounted directly behind the sprayer, in an upward and outward direction.
Blowing the cobwebs off spray drift research
Induced-draft counterflow design with axial-flow fan mounted on top of tower to draw air out.
Liquid temperature-control equipment
In year two, the heat exchanger would be retrofitted with new Scheuch heat exchanger components, including bundled, staggered row heat exchanger tubes and Variable Speed Drive (VSD) controlled axial-flow fans for more effective cooling.
Scheuch EMC Technology Improves Plant Operations
For example, CFE's high-capacity axial-flow fans with in-flight variable pitch control can be put into reverse at the push of a button, Cerklefskie said.
Retrofit-ready Solutions Target Primary Needs: With a market increasingly in search of options, suppliers promote solutions that speak to efficiency and safety concerns for brownfield projects
Hudson Products Corporation ("Hudson"), headquartered in Beasley, TX, is one of the world's leading manufacturers of heat transfer solutions including ACHEs (air-cooled heat exchangers), axial-flow fans and related aftermarket hardware.
Moody's downgrades Hudson Products' CFR to B3; outlook stable