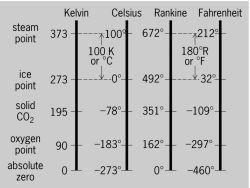 [′tem·prə·chər]
(thermodynamics)
A property of an object which determines the direction of heat flow when the object is placed in thermal contact with another object: heat flows from a region of higher temperature to one of lower temperature; it is measured either by an empirical temperature scale, based on some convenient property of a material or instrument, or by a scale of absolute temperature, for example, the Kelvin scale.
McGraw-Hill Dictionary of Scientific & Technical Terms, 6E, Copyright © 2003 by The McGraw-Hill Companies, Inc.

1. the degree of hotness of a body, substance, or medium; a physical property related to the average kinetic energy of the atoms or molecules of a substance
2. a measure of this degree of hotness, indicated on a scale that has one or more fixed reference points
3. Informal a body temperature in excess of the normal
Collins Discovery Encyclopedia, 1st edition © HarperCollins Publishers 2005

Feedback
Flashcards & Bookmarks ?
Please log in or register to use Flashcards and Bookmarks. You can also log in with
Flashcards ?
My bookmarks ?
+ Add current page to bookmarks
Mentioned in ?
References in periodicals archive ?
While axillary temperatures in infants closely align to core temperatures, research in older children and adults found axillary measures underestimated temperature compared to core measurements (Sund-Levander & Grodzinsky, 2013).
A Comparison of Oral, Axillary, and Temporal Artery Temperature Measuring Devices in Adult Acute Care
An increase in the axillary temperature was statistically significant, p=0.000 (CI, 1.56-1.23).
Efficacy of the Stellate Ganglion Block Through the Lateral Approach Using Ultrasonogram and Fluoroscopy/Ultrason ve Floroskopi Kullanilarak Lateral Yaklasimla Uygulanan Stellat Ganglion Blogunun Etkinligi
Table-2: Comparison of core and axillary temperatures between two groups
EFFICACY OF INTRAVENOUS ONDANSETRON FOR PREVENTION OF SHIVERING IN SPINAL ANAESTHESIA ADMINISTERED IN ELDERLY PATIENTS
The fever alleviation time was defined as time from baseline until the first time axillary temperature descended more than 0.5[degrees]C.
Efficacy and safety of clearing heat and detoxifying injection in the treatment of influenza: a randomized, double-blinded, placebo-controlled trial
Conclusions: Axillary temperature measurement is not a reliable method of documenting the arrival temperature in clinically unstable neonates.
Correlation of axillary temperature with rectal temperature in clinically unstable neonates
Axillary temperature for all inborn consecutive admissions was measured on admission and then two hours after admission in the neonatal unit with a mercury thermometer (Shanghai medicine and health products (r)) which could measure from 32degC to 42degC.
Neonatal hypothermia among hospitalized high risk newborns in a developing country
The important clinical observation of this study was evidence of ETF in three out of the 20 patients receiving Q+P, 2 out of these 3 patients had parasitaemia on Day 2 higher than Day 0 count, irrespective of axillary temperature and one patient had parasitaemia on Day 3 with axillary temperature [greater than or equal to]37.5.
Comparison of quinine and rabeprazole with quinine monotherapy in the treatment of uncomplicated falciparum malaria
He was pale with axillary temperature of 100[degrees]F, pulse rate was 116/min.
Pharmacovigilance in kala-azar patients with severe thrombocytopenia caused by sodium antimony gluconate & miltefosine
Our patient was haemodynamically stable with an axillary temperature of 35.5[degrees]C during the event.
Change in bispectral index following intraventricular bleed in neuroradiological suite
Each day during treatment, All patients were assessed for the duration of lever (axillary temperature) and throat pain and for their ability to tolerate eating (>750 ml) during the preceding 8 hours.
Peritonsillar abscess: a comparison of outpatient IM clindamycin and inpatient IV ampicillin/sulbactam following needle aspiration
A rectal temperature is usually 0.5 to 1.0 degrees higher than oral, which is, in turn, 0.5 to 1.0 degrees higher than that taken under the armpit (axillary temperature).
When To Call The Doctor, Part One: Fever
On the morning of March 9, she was transported to the same hospital because of an axillary temperature of 104.0 F (40.0 C) and behavioral changes.
Human rabies - Washington, 1995