synapse (sĭnˈăps), junction between various signal-transmitter cells, either between two neurons or between a neuron and a muscle or gland. A nerve impulse reaches the synapse through the axon, or transmitting end, of a nerve cell, or neuron. Most axons have terminal knobs that respond to the impulse by releasing a chemical substance known as a neurotransmitter. Crossing a gap of less than a millionth of an inch (the synaptic cleft), the neurotransmitter contacts the adjacent muscle, gland, or nerve cell or its branch receptor sites, called dendrites. Neurotransmitters known to scientists today include acetylcholine, epinephrine, and norepinephrine. These neurotransmitters either excite or inhibit the recipient cell, depending on the particular reaction between the two. In other words, a neurotransmitter may inhibit activity in the post-synapse cell when attached to a certain receptor, but may excite activity when attached to others. If sufficiently excited, the second cell transmits the impulse, typically to a muscle, gland, or another synapse. An electric synapse, unlike a chemical one, uses channels known as gap junctions to permit direct transmission of signals between neurons. Such synapses are found in the human body, within many organs and in the glial cells of the nervous system. Electrical synapses are also found among invertebrates and some lower vertebrates.
The Columbia Electronic Encyclopedia™ Copyright © 2022, Columbia University Press. Licensed from Columbia University Press. All rights reserved.
The following article is from The Great Soviet Encyclopedia (1979). It might be outdated or ideologically biased. 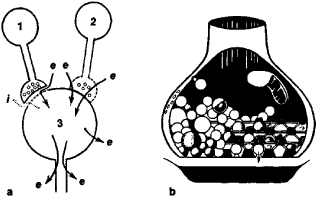