backside of the power curve 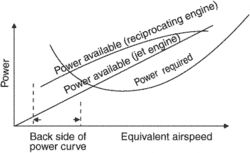 i. The curved surface of a propeller blade. It corresponds to the upper surface of the airplane's wing. Also called a blade back.
ii. The back of the power curve, where any decrease in speed results in a disproportional increase in drag. A stage may be reached when even with full power the aircraft may continue to sink. Also referred to as behind the power curve and backside of the power curve.
iii. The top part or the upper surface area of an airplane, especially of an airplane's fuselage, referred to in such contexts as “to fly on its back.”
iv. The back seat (rear cockpit) of a two-seater combat or trainer aircraft.
v. The changing of wind direction in the anti-clock-wise direction. When the wind direction changes in the anticlock-wise direction, it is called backing when the change is clock-wise, it is called veering.
An Illustrated Dictionary of Aviation Copyright © 2005 by The McGraw-Hill Companies, Inc. All rights reserved