bacteriophage (băktērˈēəfājˌ), virus that infects bacteria and sometimes destroys them by lysis, or dissolution of the cell. Bacteriophages, or phages, have a head composed of protein, an inner core of nucleic acid—either deoxyribonucleic acid (DNA) or ribonucleic acid (RNA)—and a hollow protein tail. A particular phage can usually infect only one or a few related species of bacteria; for example, coliphages are DNA-containing viruses that infect only the bacterium Escherichia coli.

Some DNA phages, called temperate phages, only lyse a small fraction of bacterial cells; in the remaining majority of the bacteria, the phage DNA becomes integrated into the bacterial chromosome and replicates along with it. In this state, known as lysogeny, the information contained in the viral nucleic acid is not expressed. A lysogenic bacterial culture can be treated with radiation or mutagens, inducing the cells to begin producing viruses and lyse. Lysogenic phages resemble bacterial genetic particles known as episomes. Incorporated phage genes are sometimes the source of the virulence of disease-causing bacteria.

The bacteriophage was discovered independently by the microbiologists F. W. Twort (1915) and Félix d'Hérelle (1917). The phages have been much used in the study of bacterial genetics and cellular control mechanisms largely because the bacterial hosts are so easily grown and infected with phage in the laboratory. Phages were also used in an attempt to destroy bacteria that cause epidemic diseases, but this approach was largely abandoned in the 1940s when antibacterial drugs became available. The possibility of “phage therapy” has recently attracted new interest among medical researchers, however, owing to the increasing threat posed by drug-resistant bacteria. In 2006 the Food and Drug Administration approved the use of bacteriophages that attack strains of Listeria as a food additive on ready-to-eat meat products. 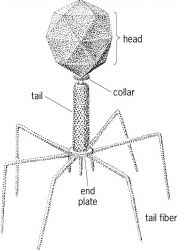