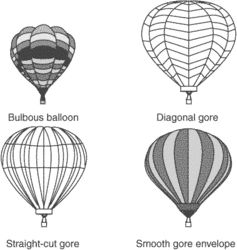 Balloons are classified in two ways: according to their shape and to their volume. There are four types of balloon shapes: bulbous, those with a smooth gore, diagonal-cut gores, and straight-cut gores.
i. Bulbous gore balloons consist of 8 to 12 bulbous gores, with varying degrees of curvature. These types of balloons have an appearance akin to a pumpkin. Each gore is built up of specially shaped horizontal panels. Their design has little horizontal stress, thereby producing a very efficient envelope. The 12-gore version is suitable for artwork, but the more bulbous 8-gore does not present such a good surface for intricate designs, unless it is contained within one gore.
ii. The smooth-gore balloon's design consists of many narrow gores with very little curvature on each. The number of gores can vary but usually ranges from 20 to 32. This produces a smooth, flatter surface where the higher stresses make it a little more prone to damage but produce a better surface to carry intricate artwork.
iii. Diagonal-cut gore balloons have designs that give shape to the gores by using fabric on the bias. It is a style that gives rise to some very attractive diagonal color patterns.
iv. Straight-cut gore balloons have alternate gores with a completely straight run of fabric, thus making it easy to manufacture.
A balloon size is measured by its volume in thousands of cubic feet: 25' means a volume of 25,000 ft3. The international classification of hot air balloons is also by sizes. Various classifications of balloons are shown in the table.
An Illustrated Dictionary of Aviation Copyright © 2005 by The McGraw-Hill Companies, Inc. All rights reserved