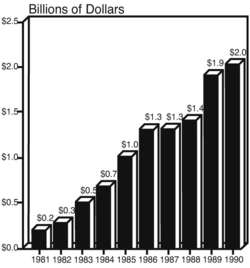 Fig. 2 Bar Chart. A diagrammatic display of a frequency distribution in which bars of equal width represent each category, with the length of each bar being proportional to the number or frequency of occurrence for each category. In the above example, the annual student loan default in $US is represented for the years 1981-1990.

a diagrammatic method for displaying FREQUENCY DISTRIBUTIONS, in which bars of equal width are drawn to represent each category, with the length of each bar being proportional to the number, or frequency of occurrence, of each category (see Fig. 2). Bar charts are used not because they present different information than can be displayed in tables, but because they can display it in a way that is easier to understand. See also HISTOGRAM.
Collins Dictionary of Sociology, 3rd ed. © HarperCollins Publishers 2000

A graphical representation of information in the form of bars. See business graphics.
Copyright © 1981-2019 by The Computer Language Company Inc. All Rights reserved. THIS DEFINITION IS FOR PERSONAL USE ONLY. All other reproduction is strictly prohibited without permission from the publisher.

Feedback
Flashcards & Bookmarks ?
Please log in or register to use Flashcards and Bookmarks. You can also log in with
Flashcards ?
My bookmarks ?
+ Add current page to bookmarks
Mentioned in ?
References in periodicals archive ?
50 percent teachers, 52 percent students and about 43 percent parents were found to be agreed with the statement that foreign interference of intelligence agencies was the root cause of terrorism Bar chart and mean score endorsed it.
Effects of Terrorism on Secondary School Students in Khyber Pakhtunkhwa
Scatter plots are best to show distribution or deviation; line charts are good at showing time series; pie charts are good at illustrating a part compared to the whole; and bar charts are good at showing ranking, part to whole, deviation, or distribution.
Telling your story: using dashboards and infographics for data visualization: data visualization allows libraries to communicate their message in a clearer and more effective way
Categorizations of bar chart images refer to their labeling into one of the predefined geometrical or nongeometrical classes.
Intelligent bar chart plagiarism detection in documents
A shadow or depth in a bar chart, for example, might look nice, but the dimension of depth adds nothing useful to the data.
To improve reports, use diagrams wisely: engineers can follow my tips to ensure their diagrams enhance their writing
The simple bar chart presents the results for each unit and may include a horizontal line that defines the target for all units.
On why all public executives should exploit the value of distributing comparative data: two simple mechanisms, the bar chart and the list, can reward high-performing units and their managers. These same two, simple feedback mechanisms can also reprove low-performing units and managers
In the following sections, I will discuss the pedagogical benefits of the component-building-and-use approach, describe the bar chart component in general, and outline the programming tasks involved in creating and using the bar chart.
Teaching software componentization: a bar chart java bean
EXPECTATIONS FOR AVERAGE PRICE OF BENCHMARK LIGHT CRUDE OIL OVER NEXT 12 MONTHS: Under $60 7% $60 to $70 29% $70 to $80 47% $80 to $90 15% Above $100 2% Note: Table made from bar chart. 69% expect their company to be affected by the slowdown in global markets.
Gloom lifts, focus shifts to unemployment
Plot a bar chart of the standard deviations computed in the previous step.
Principal components for diagnosing dispersion in multivariate statistical process control
Along with the usual misleading bar chart, these leaflets reek of infantilism and are one of the main reasons why I will never vote for them again.
Letter: Campaign issues
Magistrates at Bedlington were told that a bar chart of offences committed by Brown was one of the worst his own solicitor had seen.
DVDs hid in pants
Details of calorie, carbohydrate, fat and protein content are presented in an easy-to-understand bar chart format, along with information on how these levels relate to guideline daily amounts (GDA).
McDonald
A fighter squadron I worked with a few years ago reported monthly mission-capable (MC) rates on a bar chart. For 4 consecutive months, its rates measured better than the command standard.
Is your green light really red? Get the real story from your mission indicators. (Inside logistics: exploring the heart of logistics)