instrument used to make a continuous recording of atmospheric pressure. The pressure-sensitive element, a partially evacuated metal cylinder, is linked to a pen arm in such a way that the vertical displacement of the pen is proportional to the changes in the atmospheric pressure. The pen traces a record of pressure versus time on a chart, which is mounted on a drum rotated by a clockwork. Each chart usually provides one week's record. See barometerbarometer
, instrument for measuring atmospheric pressure. It was invented in 1643 by the Italian scientist Evangelista Torricelli, who used a column of water in a tube 34 ft (10.4 m) long.
..... Click the link for more information. .
The Columbia Electronic Encyclopedia™ Copyright © 2013, Columbia University Press. Licensed from Columbia University Press. All rights reserved. www.cc.columbia.edu/cu/cup/
The following article is from The Great Soviet Encyclopedia (1979). It might be outdated or ideologically biased.

an automatic writing device for the continuous recording of atmospheric pressure. It is used in weather stations, as well as on airplanes and balloons to record the altitude (from the change in pressure).

Barographs are distinguished according to the operating principle of the sensor; there are aneroid and mercury (weight and floating) types. Aneroid barographs are the most widely used. The sensor consists of several aneroid boxes that are fastened together. When the atmospheric pressure changes, the boxes contract or expand, causing the cover to move up or down. This movement is transmitted to a pen, which traces a curve on a ruled tape. A millimeter of vertical recording corresponds to about 1 millibar (mbar; 1 mbar = 100 newtons per sq m). The barograph is divided into daily and weekly intervals according to the amount of time it takes for the drum to make a complete revolution. The operation of the barograph is checked by comparing it with a mercury barometer.

Highly sensitive barographs are called microbarographs. A change in pressure of 0.1 mbar corresponds to 1–3 mm of vertical movement of the pen. 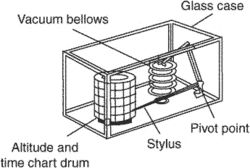 A recording barometer. The effects of changes of atmospheric pressure are communicated to a long pen, which exaggerates this movement and records it on a graph. The graph displaying atmospheric changes is known as a barogram.
An Illustrated Dictionary of Aviation Copyright © 2005 by The McGraw-Hill Companies, Inc. All rights reserved