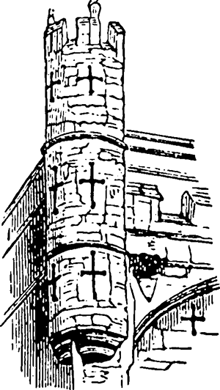 bartizan
On a fortified wall, a small overhanging structure with lookout holes and loops, often at a corner or near an entrance gateway.
McGraw-Hill Dictionary of Architecture and Construction. Copyright © 2003 by McGraw-Hill Companies, Inc.

Feedback
Flashcards & Bookmarks ?
Please log in or register to use Flashcards and Bookmarks. You can also log in with
Flashcards ?
My bookmarks ?
+ Add current page to bookmarks
Mentioned in ?
References in periodicals archive ?
"Willoughby and the Professor Meets Bartizan the Genie" (Joe Bev) continues.
Birthday Tribute to Louis Armstrong on Joe Bev's WRN Programming for the Week of August 2, 2013
We have been in the business of developing products that easily track and verify identity for over 30 years," said Lew Hoff, president of Bartizan Data Systems.
ID Detective can help owners monitor visitors to buildings
With its new gunports, bartizan, and pieds d'araignee supports rising up to the merlons, the gateway (ostensibly remodelled without explicit regimento authorization) must have taken on an appearance reminiscent of Danzilho's design for the bastions of Almeida.
The master-builder, the bureaucrat, and the practical soldier: protecting Alcacer Seguer/Qasr al-saghir (Morocco) in the Early Sixteenth Century
Closely resembling its counterpart in Arzila, the three-storey keep was crowned with a battlemented platform and corner bartizans (matacaes).
(Re)claiming walls: the fortified Medina of Tangier under Portuguese rule (1471-1662) and as a modern heritage artefact
Significantly, then, as "The heavy yet hasty step of the men-at-arms traversed the battlements, or resounded on the narrow and winding passages and stairs which led to the various bartizans and points of defence" (p.
HISTORY, ROMANCE, AND THE SUBLIME SOUND OF TRUTH IN IVANHOE (2)
bartizans, and displayed at each frequent angle, a small turret ...
Picturing property: 'Waverley' and the common law