bearing, machine part designed to reduce friction between moving parts or to support moving loads. There are two main kinds of bearings: the antifriction type, such as the roller bearing and the ball bearing, operating on the principle of rolling friction; and the plain, or sliding, type, such as the journal bearing and the thrust bearing, employing the principle of sliding friction. Roller bearings are either cylindrical or tapered (conical), depending upon the application; they overcome frictional resistance by a rolling contact and are suited to large, heavy assemblies. Ball bearings are usually found in light precision machinery where high speeds are maintained, friction being reduced by the rolling action of the hard steel balls. In both types the balls or rollers are caged in an angular grooved track, called a race, and the bearings are held in place by a frame, commonly called a pillow block or plummer block. Ball bearings or roller bearings reduce friction more than sliding bearings do. Other advantages of antifriction bearings include ability to operate at high speeds and easy lubrication.

A journal bearing usually consists of a split cylindrical shell of hard, strong metal held in a rigid support and an inner cylindrical part of soft metal, which holds a rotating shaft, or journal. A self-aligning journal bearing has a spherically shaped support that turns in a socket to adjust to movements of the shaft. Slight misalignment of the shaft can be accommodated in the ordinary journal bearing by wearing of the soft bearing material, often an alloy of tin or lead. Less frequently used are aluminum alloys, steel, cast iron, or a thin layer of silver covered with a thin coating of a soft bearing material. Ideally, a film of lubricant, normally oil, separates journal and bearing so that contact is prevented (see lubrication). Bearings that are not split are called bushings.

A thrust bearing supports an axial load on a shaft, i.e., a force directed along a shaft's length. It may be a plate at the end of a shaft or a plate against which the collar on the shaft pushes. Large thrust bearings, such as those used to transmit the motive force of a ship's propeller from the shaft to the hull, have blocks that are separated from the collar on the shaft by wedge-shaped spaces filled with oil. Graphite bearings are used in high-temperature situations. Certain plastics make satisfactory self-lubricating bearings for low speeds and light loads and, if additionally lubricated, work at higher speeds and carry greater loads. Rubber and a naturally oily wood, lignum vitae, are used in water-lubricated bearings. Watches and other precision instruments have glass or sapphire pivot bearings. In gas-lubricated bearings a film of gas separates the bearings from the moving machine parts. Magnetic bearings employ magnetic repulsion to separate journal from bearing, reducing friction still further.

in navigation, the angle between the meridian plane of the observer and the vertical plane passing through the point of observation and the observed object. The bearing angle is the same as the azimuth. Bearings are designated as true, magnetic, or compass bearings, depending on the type of meridian from which they are reckoned.

a shaft or axle support that fixes the position of a rotating or rocking part of a mechanism relative to the other parts. Bearings are classified according to the direction of loading as radial, taking loads perpendicular to the axis of the shaft; thrust, taking loads directed along the axis of the shaft; and radial-thrust, taking composite loads, mostly radial (thrust-radial bearings, taking mainly axial loads, are used less frequently). Bearings are also distinguished according to the type of friction as rolling-contact (the more common) and plain types.

[′ber·iŋ]
(civil engineering)
That portion of a beam, truss, or other structural member which rests on the supports.
(mechanical engineering)
A machine part that supports another part which rotates, slides, or oscillates in or on it.
(mining engineering)
The direction of a mine drivage, usually given in terms of the horizontal angle turned off a datum direction, such as the true north and south line.
(navigation)
The horizontal direction from one terrestrial point to another; basically synonymous with azimuth.
McGraw-Hill Dictionary of Scientific & Technical Terms, 6E, Copyright © 2003 by The McGraw-Hill Companies, Inc. 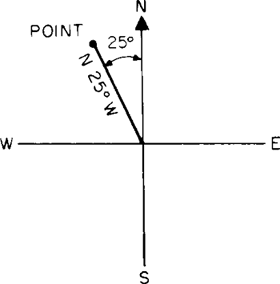 bearing, 4
1. A bearer.
2. That portion of a beam, truss, or other structural member which rests on the supports.
3. The support for a shaft, axle, or trunnion.
4. In surveying, the horizontal angle between a line and a reference meridian adjacent to the quadrant in which the line lies.
McGraw-Hill Dictionary of Architecture and Construction. Copyright © 2003 by McGraw-Hill Companies, Inc. 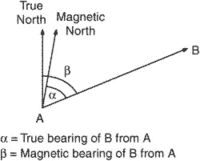 Spherical roller thrust bearing.
i. The horizontal angle at a given point measured clock-wise from a specific reference datum to a second point. The bearing can be true, magnetic, relative, or grid, depending on the selected datum.
ii. A surface that supports and reduces friction between two moving points.
An Illustrated Dictionary of Aviation Copyright © 2005 by The McGraw-Hill Companies, Inc. All rights reserved

1. a support, guide, or locating piece for a rotating or reciprocating mechanical part
2. the angular direction of a line, point, or course measured from true north or south (true bearing), magnetic north or south (magnetic bearing), or one's own position
3. the position or direction, as of a ship, fixed with reference to two or more known points
Collins Discovery Encyclopedia, 1st edition © HarperCollins Publishers 2005