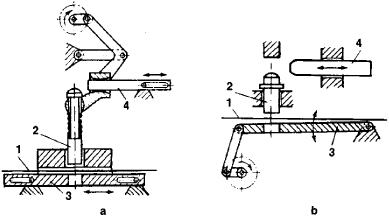 [pənch]
(computer science)
A device for making holes representing information in a medium such as cards or paper tape, in response to signals sent to it.
A hole in a medium such as a card or paper tape, generally made in an array with other holes (or lack of holes) to represent information.
(design engineering)
nail set
(mechanical engineering)
A tool that forces metal into a die for extrusion or similar operations.
McGraw-Hill Dictionary of Scientific & Technical Terms, 6E, Copyright © 2003 by The McGraw-Hill Companies, Inc.

1. A small sharply pointed metal tool which is struck with a hammer and used for centering, marking, or starting holes.
2. A steel driving tool with a sharpened edge, used to cut holes in sheet metal.
McGraw-Hill Dictionary of Architecture and Construction. Copyright © 2003 by McGraw-Hill Companies, Inc.

Feedback
Flashcards & Bookmarks ?
Please log in or register to use Flashcards and Bookmarks. You can also log in with
Flashcards ?
My bookmarks ?
+ Add current page to bookmarks
Mentioned in ?
References in periodicals archive ?
Wide runners haven't fared too well at the Birmingham track at recent meetings and we'll be happy to lay him again next time out as long as there's a possibility of him being beaten to the punch.
Stockers is shaping as open-racer in making; DOG DAY AFTERNOONS Dave Johnston's weekly look at the Bags scene
MICK McCarthy says he was beaten to the punch in a bid to bag Danny Wellbeck.
Mick: Brucie beat me to Wellbeck signing
Redknapp tried to sign Bellamy from West Ham last year but was beaten to the punch by Hughes.
Brucey plotting Bell bid; STEVE'S BACK FOR CRAIG
Didier Drogba is 4-1 with Hill and Ladbrokes to net the opener but could be beaten to the punch by Frank Lampard (6-1, Skybet).
Big guns back as Fergie's focused
Gethin,15-1-1 going in, started and ended strongly but he was getting beaten to the punch for the rest of the fight as razor-sharp Watson threw combination punches and danced from rope to rope.
Boxing: Watson arrives with Gethin victory
Being beaten to the punch by Celtic would be embarrassing for Rangers, who need a new defender to fill the gap made vacant by Carlos Cuellar's pounds 7.8m move to Aston Villa.
Football: CELTIC BID TO HIJACK RANGERS' LOOVENS SWOOP; Old firm battle for City defender Glenn
But they could yet get beaten to the punch by Emap, the radio, magazines and exhibitions group.
Radio stations race to merge
Celtic were beaten to the punch by Benfield Saints last term and a final third place behind Carlisle City was disappointing for a club accustomed to success.
Celtic want that title
BEATEN TO THE PUNCH: Jezki also beat the Fly at Punchestown
REMATCH; Our dynamic duo go head-to-head again at Leopardstown
BUNGLING X Factor bosses wanted to hold the live final of the new series at Wembley Arena but they were beaten to the punch.
BUMBLY ARENA; Timing blunder forces X Factor final to move
The May 2008 whelp broke well but was beaten to the punch by Gilly Hepden's Thandis Bob Bi who showed the superior early toe.
Bluejay soars to Oxford 500 heat win
ALEX McLeish has revealed his fear that Blues might have been beaten to the punch for Michel.
McLeish: I thought I'd lost Michel; BLUES NEWS