[′bē‚hīv ‚əv·ən]
(engineering)
An arched oven that carbonizes coal into coke by using the heat of combustion of gases that are formed, and of a small part of the coke that is formed, with no recovery of by-products.
McGraw-Hill Dictionary of Scientific & Technical Terms, 6E, Copyright © 2003 by The McGraw-Hill Companies, Inc. 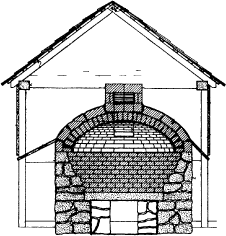 bake oven (longitudinal section)
An oven constructed of bricks, usually having a circular or oval dome; often located within the hearth of the principal fireplace of a colonial home, usually in a corner of the hearth and a few feet above it. Bake ovens were once an integral part of the fireplace construction; some were heated by glowing charcoal or embers that were swept out before the unbaked loaves were inserted and the iron oven door closed. Also called a beehive oven, bread oven, brick oven, or Dutch oven.
McGraw-Hill Dictionary of Architecture and Construction. Copyright © 2003 by McGraw-Hill Companies, Inc.

Feedback
Flashcards & Bookmarks ?
Please log in or register to use Flashcards and Bookmarks. You can also log in with
Flashcards ?
My bookmarks ?
+ Add current page to bookmarks
Mentioned in ?
References in periodicals archive ?
The north room contains the original kitchen fireplace and beehive oven. Doorways are narrow and shorter than today's height.
Reservation hosts historical society's Christmas Party
"I think there's a beehive oven behind this panel," Uncle Sam said.
Spinning the yarn of family: ten generations contributed to the history of Cherry Brook Farm
Topics include the evolution of the cast-iron range; the roasting of oxen over outdoor fires; the royal roasting ranges in the kitchens of Windsor Palace; the clockwork devices used for open-fire roasting; the history of barms and leavens; and cooking techniques for beehive ovens. The text is augmented by numerous illustrations (although not one of a beehive oven, sadly).
Over a red-hot stove; essays in early cooking technolgy
We liked the sound of that too, so we were happy to find Al Fresco Imports' Beehive Oven, a stylish double-walled terra-cotta model atop a portable iron stand.
Hot now: Beehive Oven
Nantucket scallops, spider cornbread (from a 1796 recipe, cooked in the footed skillet that prompted its name), and a wheat bread baked in a beehive oven also appear every night at the 7 o'clock seating.
Randall's Ordinary: a not-so-ordinary inn
The inn's beehive oven has been featured in many stories written about the business, especially when competitors in the annual New England Apple Pie Contest used it to bake their prize-winning pies.
Salem Cross marks 50 years of hospitality
They also found a large rock with an iron hook embedded in it, a beehive oven, a hand-hewn board carved with "PS 88 XII," and a 9-inch, solid lead stencil, stamped from "10 No.
Haunting history; `Ghost Hunters' takes a look at old home
Russell pointed out the original chestnut beams and a large fireplace with a beehive oven where breads, puddings and cakes were once baked.
Curators at heart and home; Lunenburg's oldest house inspires owners
One of them, in the family room, has a brick beehive oven of the type found in most Colonial homes.
Escape to the country; `Gracious Homes' tour set in Holden
A beehive oven next to the hearth suggests that this room, the warmest in winter, was the original kitchen.
A place called home; Betteridges carefully renovate Barre Colonial
Visitors will see the various aspects of the past, from the humble fireplace and beehive oven where the original family prepared its meals, to the magnificent wall murals attributed to itinerant artist Rufus Porter.
Hurricane roll call is a blowout; A mighty wind can be a mighty bore
Tours of the house include seeing the hand-painted "wood-grained" woodwork, a sink pump, the working hearth and beehive oven, the vast clothing collection, and the remarkable Rufus Porter murals.
Everything can be done in advance; Procrastinators learn to make excuses early