(bī`əs), fl. 6th cent. B.C., Greek sage, b. Priene. He is at best semilegendary but was called one of the Seven Wise Men of GreeceSeven Wise Men of Greece,
list of men drawn from among the outstanding politicians and political philosophers of ancient Greece. Although such listings differed widely, a usual one included Bias, Chilon, Cleobulus, Periander, Pittacus, Solon, and Thales.
..... Click the link for more information. . Many epigrams were attributed to him by ancient writers.

a voltage, current, or other input applied to a device or system as a reference or to set its conditions of operation. A bias is usually steady but may vary with time, usually within a fixed and known range and with a fixed and known frequency. In electronics, the most common forms of bias are the voltage applied to the grid of an electron tubeelectron tube,
device consisting of a sealed enclosure in which electrons flow between electrodes separated either by a vacuum (in a vacuum tube) or by an ionized gas at low pressure (in a gas tube).
..... Click the link for more information.  to set its operating conditions and the current applied to the base of a transistortransistor,
three-terminal, solid-state electronic device used for amplification and switching. It is the solid-state analog to the triode electron tube; the transistor has replaced the electron tube for virtually all common applications.
..... Click the link for more information.  to perform the same function. In tape recording, a bias current, usually alternating with a frequency in the ultrasonic range, is mixed with the signal to be recorded to minimize distortion produced by the tape itself.

[′bī·əs]
(analytical chemistry)
A systematic error occurring in a chemical measurement that is inherent in the method itself or caused by some artifact in the system, such as a temperature effect.
(electricity)
A direct-current voltage used on signaling or telegraph relays or electromagnets to secure desired time spacing of transitions from marking to spacing.
The restraint of a relay armature by spring tension to secure a desired time spacing of transitions from marking to spacing.
The effect on teleprinter signals produced by the electrical characteristics of the line and equipment.
The force applied to a relay to hold it in a given position.
(electronics)
A direct-current voltage applied to a transistor control electrode to establish the desired operating point.
grid bias
(materials)
In a reinforced composite material, the angle made by the reinforcing fibers with the longitudinal direction of the material.
(statistics)
In estimating the value of a parameter of a probability distribution, the difference between the expected value of the estimator and the true value of the parameter.
(textiles)
A direction on fabric that is equivalent to the diagonal of a square of the fabric cut so that the warp and the filling are parallel to the edges.

The establishment of an operating point on the transistor volt-ampere characteristics by means of direct voltages and currents.

Since the transistor is a three-terminal device, any one of the three terminals may be used as a common terminal to both input and output. In most transistor circuits the emitter is used as the common terminal, and this common emitter, or grounded emitter, is indicated in illus. a. If the transistor is to used as a linear device, such as an audio amplifier, it must be biased to operate in the active region. In this region the collector is biased in the reverse direction and the emitter in the forward direction. The area in the common-emitter transistor characteristics to the right of the ordinate VCE = 0 and above IC = 0 is the active region. Two more biasing regions are of special interest for those cases in which the transistor is intended to operate as a switch. These are the saturation and cutoff regions. The saturation region may be defined as the region where the collector current is independent of base current for given values of VCC and RL. Thus, the onset of saturation can be considered to take place at the knee of the common-emitter transistor curves. See Amplifier, Transistor 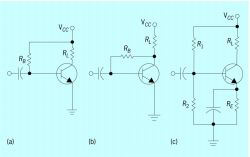 In saturation, the transistor current IC is nominally VCC/RL. Since RL is small, it may be necessary to keep VCC correspondingly small in order to stay within the limitations imposed by the transistor on maximum-current and collector-power dissipation. In the cutoff region it is required that the emitter current IE be zero, and to accomplish this it is necessary to reverse-bias the emitter junction so that the collector current is approximately equal to the reverse saturation current ICO. A reverse-biasing voltage of the order of 0.1 V across the emitter junction will ordinarily be adequate to cut off either a germanium or silicon transistor.

The particular method to be used in establishing an operating point on the transistor characteristics depends on whether the transistor is to operate in the active, saturation or cutoff regions; on the application under consideration; on the thermal stability of the circuit; and on other factors.

In a fixed-bias circuit, the operating point for the circuit of illus. a can be established by noting that the required current IB is constant, independent of the quiescent collector current IC, which is why this circuit is called the fixed-bias circuit. Transistor biasing circuits are frequently compared in terms of the value of the stability factor S = ∂IC/∂ICO, which is the rate of change of collector current with respect to reverse saturation current. The smaller the value of S, the less likely the circuit will exhibit thermal runaway. S, as defined here, cannot be smaller than unity. Other stability factors are defined in terms of dc current gain hFE as ∂IC/∂hFE, and in terms of base-to-emitter voltage as ∂IC/∂VBE. However, bias circuits with small values of S will also perform satisfactorily for transistors that have large variations of hFE and VBE. For the fixed-bias circuit it can be shown that S = hFE + 1, and if hFE = 50, then S = 51. Such a large value of S makes thermal runaway a definite possibility with this circuit.

In collector-to-base bias, an improvement in stability is obtained if the resistor RB in illus. a is returned to the collector junction rather than to the battery terminal. Such a connection is shown in illus. b. In this bias circuit, if IC tends to increase (either because of a rise in temperature or because the transistor has been replaced by another), then VCE decreases. Hence IB also decreases and, as a consequence of this lowered bias current, the collector current is not allowed to increase as much as it would if fixed bias were used. The stability factor S is

shown in Eq. (1). This value is smaller than hFE + 1, which is the value obtained for the fixed-bias case.

If the load resistance RL is very small, as in a transformer-coupled circuit, then the previous expression for S shows that there would be no improvement in the stabilization in the collector-to-base bias circuit over the fixed-bias circuit. A circuit that can be used even if there is zero dc resistance in series with the collector terminal is the self-biasing configuration of illus. c. The current in the resistance RE in the emitter lead causes a voltage drop which is in the direction to reverse-bias the emitter junction. Since this junction must be forward-biased (for active region bias), the bleeder R1-R2 has been added to the circuit.

If IC tends to increase, the current in RE increases. As a consequence of the increase in voltage drop across RE, the base current is decreased. Hence IC will increase less than it would have had there been no self-biasing resistor RE. The stabilization factor for the self-bias circuit is shown by Eq. (2), where RB = R1R2/(R1 + R2).

The smaller the value of RB, the better the stabilization. Even if RB approaches zero, the value of S cannot be reduced below unity.

In order to avoid the loss of signal gain because of the degeneration caused by RE, this resistor is often bypassed by a very large capacitance, so that its reactance at the frequencies under consideration is very small.

The selection of an appropriate operating point (ID, VGS, VDS) for a field-effect transistor (FET) amplifier stage is determined by considerations similar to those given to transistors, as discussed previously. These considerations are output-voltage swing, distortion, power dissipation, voltage gain, and drift of drain current. In most cases it is not possible to satisfy all desired specifications simultaneously.

1. Electronics the voltage applied to an electronic device or system to establish suitable working conditions
2. Bowls
a. a bulge or weight inside one side of a bowl
b. the curved course of such a bowl on the green
3. an inaudible high-frequency signal used to improve the quality of a tape recording

A voltage applied to the gate (or base) of a transistor or vacuum tube, which causes the device to operate in its conductive state. When the control voltage (input voltage) is applied to the gate, it is added to the bias, causing the resultant voltage to be higher or lower, based on the sum of the two.

Bias is widely used in analog devices, such as an audio amplifier, to keep the input voltage constantly within the conductive region of the transistor or tube. It is also used in digital circuits to reach a certain threshold and open or close the switch faster.