Also found in: Dictionary, Thesaurus, Medical.
Related to Bile Pigments: bilirubin, biliverdin, jaundice, Bile salts
The following article is from The Great Soviet Encyclopedia (1979). It might be outdated or ideologically biased.

coloring matters that are among the components of bile and are present in small quantities in the blood and tissues.

The most important bile pigments, which are found in the bile of man and carnivorous animals, are the green pigment biliverdin and the reddish yellow pigment bilirubin. The structure of the bile pigments includes four pyrrhole rings interconnected by carbon atoms. Bile pigments are formed during the decomposition of hemoglobin, mainly in the spleen and liver. Under ordinary circumstances, about 280 mg of bile pigments are produced in the human body in 24 hours. In the liver, bilirubin is converted predominantly to diglucuronide. Human blood normally contains from 0.25 x 10-3 percent to 1.2 x 10-3 percent bilirubin, of which approximately three-quarters is free bilirubin. Normally, bile pigments entering the intestinal tract from the liver are discharged from the body with the stool in the form of stercobilinogen—bilirubin reduced by intestinal bacteria (40–280 mg per day). Stercobilinogen is oxidized in the presence of light to stercobilin. Part of the reduced bilirubin is absorbed from the intestine into the blood, enters the liver with the blood, and is again secreted with bile. A smaller amount of the bili-rubin bypasses the liver and is discharged through the kidneys in the form of urobilinogen with the urine (4 mg per day). Urobilinogen is converted to urobilin in the presence of light and air. The entire course of bile-pigment formation from hemoglobin is presented in the following flow-chart: 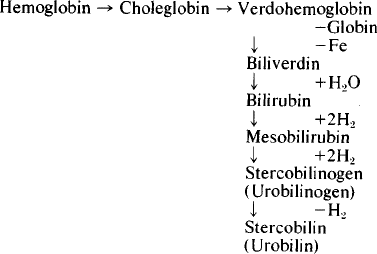 Bile pigments possess the properties of acids and yield salts (sometimes insoluble) with metals, which accounts for their part in the formation of gallstones. An increase in the bile-pigment content of cutaneous coverings, blood, and urine is of diagnostic significance in various forms of jaundice.

Phylloerythrin is a red pigment in the bile of herbivores; it is a derivative of chlorophyll and is not one of the bile pigments.

Feedback
Flashcards & Bookmarks ?
Please log in or register to use Flashcards and Bookmarks. You can also log in with
Flashcards ?
My bookmarks ?
+ Add current page to bookmarks
Mentioned in ?
References in periodicals archive ?
In view of these observations and the fact that the bile pigment associates stronglywith membranes, our work suggested that one beneficial role of the waste product bilirubin may be to act as a powerful biological chain-breaking antioxidant.
Turning catabolism into usefulness--a jaundiced view
The liver, it seemed, was not breaking up the hemoglobin to bile pigment. Instead, it was changing some of the hemoglobin to the gold-containing variety and getting rid of it by way of eggshell.
A Very Special Kind of Goose
For many years, the bile pigment bilirubin was considered a toxic waste product formed during heme catabolism.
Association of serum bilirubin concentration with risk of coronary artery disease
(7) compared the peroxyl antioxidant trapping potential of various substances and found that free bile pigments showed higher activity than did the vitamin E analog Trolox.
The antioxidant role of bile pigments evaluated by chemical tests.
Bilirubin in the premature: toxic waste or natural defense?
Free and conjugated bile pigments of body fluids: qualitative analysis by thin-layer chromatography.
Simultaneous fluorescence detection of fecal urobilins and Porphyrins by Reversed-Phase high-performance thin-layer chromatography
15 In human biology, what J is a yellow discolouration of the skin caused by an excess of bile pigments in the blood?
ARE YOU THE WEAKEST LINK?
Preanalytical factors aside [8-10], interfering chromogens include several other ordinary side-products of lipid autooxidation, alkanals, alkenals, and alkadienals as well as bile pigments, cyclic peroxides, carbohydrates, and amino acids X11-18].
Nonchromatographic assay for malondialdehyde-thiobarbituric acid adduct with HPLC equivalence
Stools did not contain bile pigments. Aspartate aminotransferase (AST) (240 U/L, reference interval 16-58 U/L), alkaline phosphatase (399 U/L, reference interval 225-370 U/L), and [gamma]-glutamyltransferase (782 U/L, reference interval 11-49 U/L) were increased.
Absence of serum alanine aminotransferase activity in a neonate