morning glory, common name for members of the Convolvulaceae, a family of herbs, shrubs, and small trees (many of them climbing forms) inhabiting warm regions, especially the tropics of America and Asia. The family is characterized by milky sap. The largest groups are the predominantly tropical morning-glory genus (Ipomoea), with species most abundant in Mexico, and the bindweed genus (Convolvulus) of more temperate regions. Many bindweeds are also called morning glory. Species of both are chiefly herbaceous vines of prolific growth and with colorful funnel-shaped blossoms that often open only in the morning. I. purpurea is the morning glory cultivated as an ornamental in North America. The moonflowers (including I. alba), tropical American night-blooming vines, have similarly shaped but much larger blossoms, often heavily fragrant. Convolvulus scammonia is the scammony of Asia Minor; a resin exuded from its roots is exported from Aleppo and Smyrna as a medicine. The most important commercial plant of the family, the sweet potato, belongs to the morning-glory genus. The wild sweet potato or potato vine (I. pandurata), a common weed of North America, is not eaten. The dodders (genus Cuscuta, formerly classified as a separate family) are common leafless, parasitic vines that often resemble bright orange threads. Each of the widely distributed species parasitizes a specific host; C. epilinum, for example, lives on flax. The morning-glory family is classified in the division Magnoliophyta, class Magnoliopsida, order Solanales. 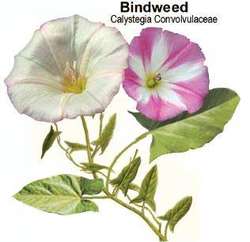 Includes Morning Glory. Aggressive vine with funnel-shaped flowers with 5 fused petals. Roots and young shoots used medicinally on some types as survival food and purgative, (causing the body to purge itself), but flowers overall not recommended for consumption because of hallucinogenic compounds. Be careful with these. Some are toxic, some aren’t. Too many for this book too explain. Do research.
Edible Plant Guide © 2012 Markus Rothkranz
The following article is from The Great Soviet Encyclopedia (1979). It might be outdated or ideologically biased.

(1) A genus of plants(Convolvulus) of the family Convolvulaceae. The plants can be twining or nontwining herbs and shrubs. There are approximately 250 species, distributed mainly in the temperate regions. In the USSR there are 30 species. The most common is the lesser bindweed,(C. arvensis), a persistent perennial soboliferous weed with pale-rose slightly aromatic flowers. The plant grows on cultivated and fallow land, along dams, in ravines, and in other similar habitats. As green fodder bindweed is poisonous in large quantities, but it is harmless in hay. The desert species, C. divaricatus and C. erinaceus, are valuable feed plants. The species C. subhirsutus grows in the forest foothills of Middle Asia. A highly toxic plant of the Crimea, Asia Minor, and the Near East is C. scammonia.

(2) Often the name bindweed includes several species with twining stems of the genus Calystegia, which is also in the family Convolvulaceae.

1. any convolvulaceous plant of the genera Convolvulus and Calystegia that twines around a support
2. any of various other trailing or twining plants, such as black bindweed
Collins Discovery Encyclopedia, 1st edition © HarperCollins Publishers 2005

Feedback
Flashcards & Bookmarks ?
Please log in or register to use Flashcards and Bookmarks. You can also log in with
Flashcards ?
My bookmarks ?
+ Add current page to bookmarks
Mentioned in ?
References in periodicals archive ?
field bindweed is a perennial plant and a noxious weed in cultivated crops pastures and gardens.
ALLELOPATHIC EFFECT OF FIELD BINDWEED (CONVOLVULUS ARVENSIS L.) WATER EXTRACTS ON GERMINATION AND INITIAL GROWTH OF MAIZE
A few respondents had tried bindweed mites with some success.
The 10 worst garden weeds: the votes from more than 2,000 gardeners are in! From crab grass to bindweed to thistle, here are the best control strategies for North America's worst garden weeds
residues from total organs of field bindweed added to the soil, at least wheat height was 73.32 cm, while maximum wheat height related to root residues was 80.65 cm.
Comparison of field bindweed (Convolvulus arvensis L.) and bermuda grass (Cynodon dactylon L.) organs residues on yield and yield components of bread wheat (Triticum aestivum L.)
Discovered by ARS scientists in Greece, the microscopic Mediterranean mite Aceria malherbae attacks field bindweed, gnawing its leaves.
Ten weeds we could live without
| POUR BOILING WATER OVER IT: If you don't want to use weedkiller, pour boiling water over the bindweed and around three inches beyond where it is growing, to kill as much root as possible.
Five ways to get rid of bindweed
What 9 can I grow on a new allotment infested with bindweed? - Tony Burke, Bury St Edmunds, Suffolk
Rotten plants didn't make the cut.. & Can I weed out a pest? Your Gardening EXPERT ADVICE
No sooner have you weeded the beds and borders during a fine spell than you'll have to do it again following a downpour, as seedlings emerge and difficult perennial weeds such as ground elder, couch grass and bindweed do their worst, climbing up plants or spreading their underground roots so they are virtually impossible to eradicate.
Rain on weeds' parade; HOW TO BANISH GARDEN PESTS
6 Persistent weeds such as bindweed and ground elder can be spot treated with a selective weedkiller.
Gardening extra: TIPS FOR THE WEEK
For tough perennial weeds such as dandelions, nettles and bindweed you need to kill the leaves and the roots, so a systemic herbicide containing glyphosate is the answer.
The next seven days in the garden; Weeds can be such a bind
taCkle | bindweed in borders by removing or painting on weedkiller (you don't want to kill another plants in the process by spraying wildly).
WHAT TO DO THIS WEEK
And then there are those ragwort tough to beat plants like Convolvulus (bindweed) and scutch that can regrow if even minuscule pieces of root are left behind.
Dig in for the war on weeds
1 If bindweed has grown up into plants, cut it off at the base, leaving the rest twining around the plant.
3 ways to ... Control difficult weed