modulation, in communications, process in which some characteristic of a wave (the carrier wave) is made to vary in accordance with an information-bearing signal wave (the modulating wave); demodulation is the process by which the original signal is recovered from the wave produced by modulation. The original, unmodulated wave may be of any kind, such as sound or, most often, electromagnetic radiation, including optical waves. The carrier wave can be a direct current, an alternating current, or a pulse chain. In modulation, it is processed in such a way that its amplitude, frequency, or some other property varies.

In a variant of amplitude modulation, called single sideband modulation (SSB), the modulated signal contains only one sideband and no carrier. The information can be demodulated only if the carrier is used as a reference. This is normally accomplished by generating a wave in the receiver at the carrier frequency. SSB modulation is used for long-distance telephony (such as in the amateur radio bands) and telegraphy over land and submarine cables.

In frequency modulation (FM), the frequency of the carrier wave is varied in such a way that the change in frequency at any instant is proportional to another signal that varies with time. Its principal application is also in radio, where it offers increased noise immunity and decreased distortion over the AM transmissions at the expense of greatly increased bandwidth. The FM band has become the choice of music listeners because of its low-noise, wide-bandwidth qualities; it is also used for the audio portion of a television broadcast.

Digital radio is based on frequency division multiplexing (FDM), which allows transmission of multiple signals simultaneously over a single transmission path, such as a cable or wireless system. Each signal travels within its own unique frequency range (carrier), which is modulated by the data (audio, video, etc.). Orthogonal frequency-division multiplexing (OFDM) takes this concept further, separating an individual transmission into multiple low-frequency signals with a high resistance to interference. A further extension of the technology, coded orthogonal frequency-division multiplexing (COFDM), is widely used in Europe and elsewhere where the digital audio broadcast (DAB) standard has been adopted. OFDM and COFDM offer the benefits of high spectral efficiency, resilience to radio-frequency (RF) interference, and lower multipath distortion.

Phase modulation, like frequency modulation, is a form of angle modulation (so called because the angle of the sinewave carrier is changed by the modulating wave). The two methods are very similar in the sense that any attempt to shift the frequency or phase is accomplished by a change in the other.

, in music
modulation, in music, shift in the key center of a composition. For its accomplishment use is made of the fact that each chord figures in the harmonic relationships of several keys. In modulating from one key to another, a chord that is common to both keys is used as a pivot chord. If there is no chord common to the two keys, a passage may move through several keys before the desired modulation has been effected. Modulation is commonly employed as a means of achieving variety in a composition and has been in use since the late 15th cent.

To measure, to adjust to, or regulate by a certain proportion; to temper or to soften in passing from one element, form, or material to another.
Illustrated Dictionary of Architecture Copyright © 2012, 2002, 1998 by The McGraw-Hill Companies, Inc. All rights reserved
The following article is from The Great Soviet Encyclopedia (1979). It might be outdated or ideologically biased.

in music, a change of key by displacement of the tonic (tonal modulation). In ordinary functional modulation the connection between two keys is established by a chord common to both, the pivot chord, the function of which changes with the appearance of a harmonic shift that is characteristic of the new key. The modulating chord, with the corresponding alteration, is of decisive importance.

A special type of functional modulation is enharmonic modulation, in which the pivot chord is common to both the old and the new key, owing to the enharmonic interpretation of its structure. This kind of modulation easily connects distant keys and often produces the impression of an unexpected, abrupt modulatory shift.

Of great importance in modulation are the melodic connections of chords, or natural voice leading, which can play a major role, pushing aside and even completely replacing the functional connections of chords. Melodic harmonic modulation that lacks a common chord is most typical of the direct jump to a distant key, in which only the modulating chord that is melodically leading serves as a link from one key to the other. Melodic modulation per se (without harmony), which can also go to a remote key, is encountered in one-voice (or octave) movement.

Modulation that occurs without any preparation and with the immediate establishment of the new tonic is called a confrontation of tonalities. Usually, it is used in the transition to a new section of a musical form, but occasionally it is encountered within a particular structure.

Tonal modulation is distinguished from modal modulation, in which the tonic is not displaced but the key changes from the major to the minor of the same name, or vice versa.

(in physics and technology), the variation with respect to time of quantities that describe some regular process. It is produced by an external influence. The modulation of electromagnetic oscillations in the radio-frequency and optical bands is of great practical value. The operation of all electron devices is based on the modulation of an electron flux. Thus, in electron tubes the density of the electron flux is modulated, and in television picture tubes the intensity of the electron beam that bombards the screen is modulated. In klystrons and other superhigh-frequency electron devices, modulation of the electron velocity is used. Modulation is extensively used in measurement technology; preliminary modulation of the quantity being measured can increase the sensitivity of the apparatus and improve the accuracy of measurement.

[‚mäj·ə′lā·shən]
(communications)
The process or the result of the process by which some parameter of one wave is varied in accordance with some parameter of another wave.
(mechanical engineering)
Regulation of the fuel-air mixture to a burner in response to fluctuations of load on a boiler.
McGraw-Hill Dictionary of Scientific & Technical Terms, 6E, Copyright © 2003 by The McGraw-Hill Companies, Inc. 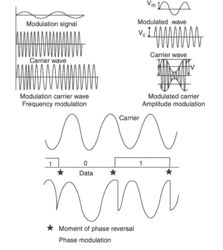 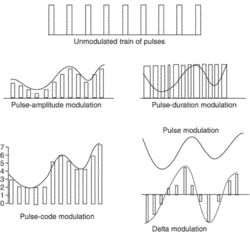 Modulation refers to altering an oscillating, fixed-frequency carrier wave (radio wave) in order to transmit data, audio or video from one location to another, either wired or wireless. The data are merged into the carrier.

At the receiving end, a tuner latches onto the particular carrier frequency and a demodulator circuit isolates the data from the carrier. See carrier.

In traditional analog telephony, modulation alters a DC current. In such a conversation, both parties are modulating the current simultaneously.