[‚bech·ə′lās·ē‚ē]
(botany)
A small family of dicotyledonous plants in the order Fagales characterized by stipulate leaves, seeds without endosperm, and by being monoecious with female flowers mostly in catkins.
McGraw-Hill Dictionary of Scientific & Technical Terms, 6E, Copyright © 2003 by The McGraw-Hill Companies, Inc. 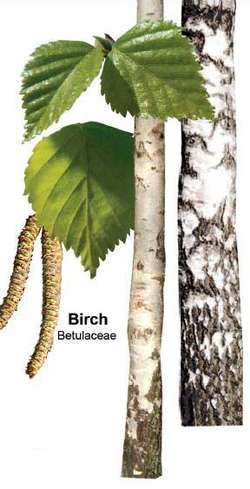 a family of monoecious, dicotyledonous plants.

Betulaceae are trees or shrubs with alternate leaves and early falling stipules. The flowers are small, plain, unisexual, anemophilous, and gathered into compound, catkin-like inflorescences consisting of extremely vestigial dichasia (two or three flowered). The staminal (male) catkins are pendulous, long, and cylindrical; the pistillate (female) ones are more or less upright, shorter than the staminal ones, and cylindrical or oval. The ovary is on top. The fruit is nutlike, winged, or wingless. There are two genera of Betulaceae: Betula (birch) and Alnus (alder). The number of species is very approximate (because of highly developed hybridization of the birch) but is close to 200. Betulaceae are distributed chiefly in the nontropical regions of the northern hemisphere, but they are also found in southern Asia and in America as far south as Chile and Argentina. Both the birch and the alder are important timber-forming species. Sometimes the hazels are included in the Betulaceae family as a special subfamily.

Feedback
Flashcards & Bookmarks ?
Please log in or register to use Flashcards and Bookmarks. You can also log in with
Flashcards ?
My bookmarks ?
+ Add current page to bookmarks
Mentioned in ?
References in periodicals archive ?
In addition to birch family, fertilization-shade treatments, and defoliation in the previous year, there was a further treatment in our design, the rapid inducible resistance (RIR), which had been demonstrated earlier in the mountain birch (e.g., Haukioja and Hanhimaki 1985).
The birch variables were analyzed by ANOVA (GLM procedure of SAS with Type III sums of squares; SAS Institute 1990), including birch family as a random effect and fertilization - shade treatment and previous-year defoliation (to trigger DIR) as fixed effects.
Birch family accounted for significant variation on long-shoot growth and proportion of long shoots in the upper part of the crown (Table 1).
For all variables of leaf chemistry except P, birch family had a significant effect (Table 2).
Delayed inducible resistance in mountain birch in response to fertilization and shade
For the past three summers Glaser has volunteered at the Birch Family Camp (Putnam Valley, NY) as a counselor for three- to six-year-olds.
MANAGEMENT PERSONNEL
Untouched by mental illness until 1992, the Birch family has had to learn fast about a condition about which so little is known.
Aspects: When the anguish was too much to endure; He had everything to live for until schizophrenia was diagnosed. After seven years of torment he killed himself. Mel Hunter reports on the tragedy of Timothy Birch