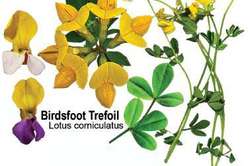 A nitrogen fixer-it puts nitrogen into your soil acting as natural fertilizer and composter. Very alkalizing and good source of protein. Yellow flowers and leaves are great in salads. In alfalfa clover family.

Feedback
Flashcards & Bookmarks ?
Please log in or register to use Flashcards and Bookmarks. You can also log in with
Flashcards ?
My bookmarks ?
+ Add current page to bookmarks
TheFreeDictionary presents:
Write what you mean clearly and correctly.
Mentioned in ?
References in periodicals archive ?
Picture perfect Caerlaverock meadow and bird's foot trefoil (inset) Photos: Brian Morrell
Mixed weather conditions are blooming great; Sunshine and heavy rain give plantlife growth burst
In other places, their project will be using seed or plug plants to introduce wildflowers such as bird's foot trefoil, salad burnet and pepper saxifrage.
Help needed on Middlesbrough's becks
'The data seem to support other evidence pointing to the eutrophication of our countryside: species that have increased the most are also those that are well-suited to enriched soils, while those species that have lost out, such as bird's foot trefoil, are suited to less nutrient-rich soils:
Britain's favourite wildflowers on the brink
Adrian had agreed to show me some of the roadside verges in the area, and so we were soon driving around the leafy lanes that surround Moel Findeg on the eastern side of the Clwydian Range of hills, and admiring the verges, here and there dotted with limestone grassland plants, such as bird's foot trefoil and lady's bedstraw.
Wildlife havens on the verge of a revival
Another colloquial name is Bird's Foot Trefoil, which has a tiny yellow pea-like flower and almost minute clover-like leaf.
Norman finds pick of the crop
Characteristic plants include yellow wort, common centaury, St John's wort, rocket and bird's foot trefoil.These sites are difficult to defend against development because they are exindustrial (brownfield) and they contain low levels of contaminants.They were once common on Teesside but many have now been reclaimed while others remain under threat of re-development.
Maze Park
" Even in the first year we , bird's foot trefoil and field scabious.
Volunteers go wild in town's park; With wildflower hay meadows about to flower, Environment Editor Tony Henderson talks to the team who have created their own