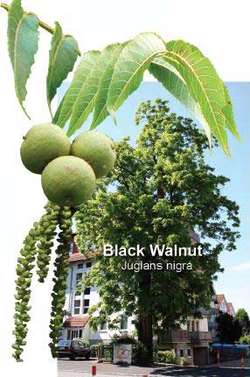 Tree grows to 120 feet. (40m) Rounded lime-shaped fruit- a very strong anti-parasite herb and mitosis inhibitor (helps stop cancer cells from dividing) Rich in iodine, important for production of thyroid hormones. Green hulls of black walnut are even better for anti-parasite action. Leaf tea is astringent ((bleeding, diarrhea), insecticide against bedbugs, anti-fungal against athlete’s foot(ringworm), lice, anti-viral, anti-tumor, and very strong sedative. Leaf tea also used for eczema, hives and boils. This plant packs some power! The nut is covered in a shell, which is covered in a husk. After collecting, remove husk and let nut dry for a couple of weeks. Then like with acorns, put them in water. Throw out any that float. Put in hot water and soak for a day (water can cool down while soaking). Throw out water, add new hot water and soak a couple more hours. Then remove shells and seal in glass jars in refrigerator for up to a year. The green hulls can be ground into a powder and used for parasite killing internally or externally. It’s in my parasite formula. Inner bark is laxative. Do not use internally if pregnant.
Edible Plant Guide © 2012 Markus Rothkranz

Feedback
Flashcards & Bookmarks ?
Please log in or register to use Flashcards and Bookmarks. You can also log in with
Flashcards ?
My bookmarks ?
+ Add current page to bookmarks
Mentioned in ?
References in periodicals archive ?
What I learned about cancer was much simpler than anything I absorbed in this black walnut drupe-dropping process I investigated.
Juglans Nigra/(Eastern Black Walnut)
In a first-of-its-kind study, researchers at the University of Missouri, Columbia, have confirmed that black walnuts contain molecular compounds called phytosterols, which have been shown to help prevent obesity, diabetes, and cardiovascular disease while promoting lower cholesterol and inflammation as well as anticancer activity in the body.
BLACK WALNUTS CONTAIN HEART-HEALTHY NUTRIENTS
Many gardeners have shared with me their own success stories of what will and what won't grow near black walnuts, and there are numerous lists online from universities, arboreta, and botanical gardens for both juglone-susceptible and juglone-tolerant plants.
Walnut tree causes harsh growing conditions
Trees infected with TCD are generally condemned, removed, and taken to "safe" areas or areas where the disease is known to exist or is not in proximity to healthy black walnut trees.
Protocol for heat treating black walnut wood infested with walnut twig beetle
Black walnut has made news in recent years because of the damage done by 1000 Cankers Disease.
Beauty & bold
Mature black walnut trees (n = 14) were selected at the Strong Stock Farm in Knoxville, TN (N 36[degrees] 3' 7.1526" W 83[degrees] 47' 23.3802") in Apr 2011.
Concentrations of imidacloprid and olefin-imidacloprid metabolite in the walnut husk maggot (Diptera: Tephritidae)
Thousand cankers disease has decimated eastern black walnut, Juglans nigra, in landscape and urban plantings in some Western states and parts of Colorado, where, in 2008, the association of the beetle and fungal pathogen in the disease was first discovered and reported by researchers at Colorado State University.
ONGOING RESEARCH: A look at EIPD Strategic Initiative projects
The leaves of black walnut are used for treatment of ringworm to make a green dye and as an insecticide.
Walnuts is gold of Pakistan
State Department of Agriculture plants expert Dan Hilburn said the public is likely to notice black walnut trees declining over the next five to 10 years.
Around the region
The building includes pilot accommodations, VIP lounges, conference rooms and offices, as well as the Black Walnut Cafe.
FBO opens new facility at Texas airport
New York (AirGuide - Airline & Travel News) Tue, Feb 25, 2014 - From the Black Walnut Old Fashioned in the Northeast to the Basil Peach Gimlet in the Southeast, Omni Hotels & Resorts has created a new menu of cocktails for its properties that offers drinks with distinctive regional tastes.
Regional flair for Omni's new cocktail menu
Q: We have many large, black walnut trees on our property.
Weighted walnuts