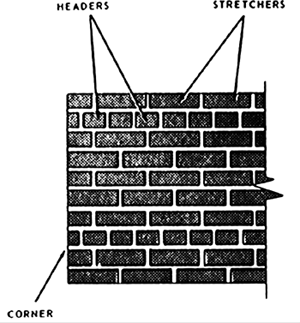 common bond
A pattern of brickwork in which every third, fifth, sixth, or seventh course consists of headers (i.e., bricks laid horizontally with their lengths perpendicular to the face of the wall), and the other courses consist of stretchers (i.e., bricks laid horizontally so that their lengths are parallel to the face of the wall). This pattern is widely used because it can be laid relatively quickly.
McGraw-Hill Dictionary of Architecture and Construction. Copyright © 2003 by McGraw-Hill Companies, Inc.