crystal, a solid body bounded by natural plane faces that are the external expression of a regular internal arrangement of constituent atoms, molecules, or ions. The formation of a crystal by a substance passing from a gas or liquid to a solid state, or going out of solution (by precipitation or evaporation), is called crystallization.

Crystals differ in physical properties, i.e., in hardness, cleavage, optical properties, heat conductivity, and electrical conductivity. These properties are important since they sometimes determine the use to which the crystals are put in industry. For example, crystalline substances that have special electrical properties are much used in communications equipment. These include quartz and Rochelle salt, which supply voltage on the application of mechanical force (see piezoelectric effect), and germanium, silicon, galena, and silicon carbide, which carry current unequally in different crystallographic directions, as semiconductor rectifiers. 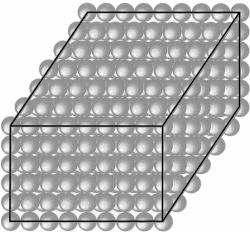