1. the hinged metal part of a motor vehicle body that provides access to the engine, or to the luggage space in a rear-engined vehicle
2. a cowl on a chimney
3. Nautical a piece of sail laced to the foot of a foresail to give it greater area in light winds
Collins Discovery Encyclopedia, 1st edition © HarperCollins Publishers 2005

A small, self-supporting protective hood or roof over an exterior doorway; may be constructed of any exterior material.

1. A chimney cap.
2. A frame of wire netting over a chimney to prevent the escape of sparks.
3. Same as bird screen.
4. A cap placed over a pile to prevent damage to the pile while it is being driven.
5. The small roof over a bay window.
6. A covering over an exterior door or window to provide shelter and/or a decorative element; Also see pent. 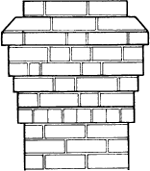 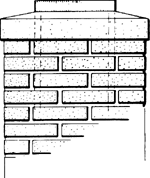 chimney cap, 1
1.An abacus or cornice forming a crowning termination of a chimney.
2. A rotary device, moved by the wind, which facilitates the escape of smoke by turning the exit aperture away from the wind, preventing the entry of rain or snow and improving the draft.
3. A chimney hood.
McGraw-Hill Dictionary of Architecture and Construction. Copyright © 2003 by McGraw-Hill Companies, Inc.

Feedback
Flashcards & Bookmarks ?
Please log in or register to use Flashcards and Bookmarks. You can also log in with
Flashcards ?
My bookmarks ?
+ Add current page to bookmarks
Mentioned in ?
References in classic literature ?
But when that bonnet went on, Polly actually held her breath till it was safely landed and the pink rose bloomed above the smooth waves of hair with what Fanny called "a ravishing effect." At this successful stage of affairs Polly found it impossible to resist the loan of a pair of gold bands for the wrists and Fanny's white fan with the little mirror in the middle.
It is a well-known fact that dress plays a very important part in the lives of most women and even the most sensible cannot help owning sometimes how much happiness they owe to a becoming gown, gracefully arranged hair, or a bonnet which brings out the best points in their faces and puts them in a good humor.
"My bonnet is straight, and that 's all I care about.
Poor dear, did she get her little bonnet knocked into a cocked hat and her little temper riled at the same time?"
But it was not, and Polly's fun cost more than the price of gloves and bonnet, for, having nibbled at forbidden fruit, she had to pay the penalty.
View in context
Miss Knag vanished without another word, and in all reasonable time was replaced by Kate, who took off the new bonnets and put on the old ones: blushing very much to find that the old lord and the two young ladies were staring her out of countenance all the time.
View in context
Wet through and through: with her feet squelching and squashing in her shoes whenever she moved; with a rash of rain upon her classical visage; with a bonnet like an over-ripe fig; with all her clothes spoiled; with damp impressions of every button, string, and hook-and-eye she wore, printed off upon her highly connected back; with a stagnant verdure on her general exterior, such as accumulates on an old park fence in a mouldy lane; Mrs.
View in context
One small child was poking turtles with Amy's cherished parasol, a second was eating gingerbread over Jo's best bonnet, and a third playing ball with her gloves.
Stoop down, and let me take the crumbs off of your bonnet."
View in context
Mohammed Iqbal, a long-term resident of the Sultanate, was driving to work around 8:30 am on Wednesday when he noticed a snake emerging from underneath his car bonnet. It had supposedly slithered into the bonnet to take refuge from the scorching heat and appeared after the engine started to heat up.
Indian expat finds snake on car bonnet
Summary: Gurugram (Haryana) [India], June 28 (ANI): In a bizarre incident, an employee at the Kherki Daula toll plaza was dragged by a speeding car while the employee held on to its bonnet in Gurugram.
Gurugram: Toll tax employee dragged on bonnet of car
A man who was captured jumping on the bonnet of a stationary car targeted four vehicles in four minutes.
Bonnet jumper targets four cars in FOUR MINUTES outside hospital; A video of the man being pulled off one bonnet went viral - but that wasn't the full story