Med
a. the examination of a part of the body by means of a scanner
b. the image produced by a scanner
Collins Discovery Encyclopedia, 1st edition © HarperCollins Publishers 2005

[skan]
(computer science)
To examine information, following a systematic, predetermined sequence, for some particular purpose.
(electronics)
The motion, usually periodic, given to the major lobe of an antenna; the process of directing the radio-frequency beam successively over all points in a given region of space.
(engineering)
To examine an area, a region in space, or a portion of the radio spectrum point by point in an ordered sequence; for example, conversion of a scene or image to an electric signal or use of radar to monitor an airspace for detection, navigation, or traffic control purposes.
One complete circular, up-and-down, or left-to-right sweep of the radar, light, or other beam or device used in making a scan.
McGraw-Hill Dictionary of Scientific & Technical Terms, 6E, Copyright © 2003 by The McGraw-Hill Companies, Inc. 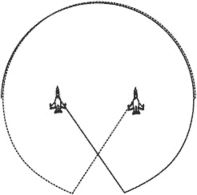 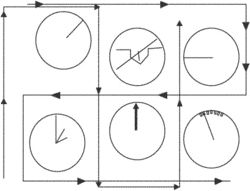 Two of the techniques for scanning primary flight instruments.

Scanning by lobe comparison.
i. To search the sky for any hostile aircraft. The area of the scan for a typical two-aircraft formation is indicated in the illustration. In flight, the term means “Search the sector indicated and report any contacts.”
ii. To make a sweep of selected flight instruments or an external scene with the eyes.
iii. The path periodically followed by a radiation beam. See helical scan and conical scanning.
iv. The motion of an electronic beam through space looking for a target. Scanning is carried out by the motion of the antenna or by lobe switching.
An Illustrated Dictionary of Aviation Copyright © 2005 by The McGraw-Hill Companies, Inc. All rights reserved

(2)
A real-time language from DEC.

(storage, algorithm)
An algorithm for scheduling multiple accesses to a disk. A number of requests are ordered according to the data's position on the storage device. This reduces the disk arm movement to one "scan" or sweep across the whole disk in the worst case. The serivce time can be estimated from the disk's track-to-track seek time, maximum seek time (one scan), and maximum rotational latency.

Scan-EDF is a variation on this.
This article is provided by FOLDOC - Free Online Dictionary of Computing (foldoc.org)

(1) To make an electronic comparison of a signal, pixel or data structure as described in the following definitions.

(2) In optical technologies, to read a printed form a line at a time in order to convert images into bitmapped representations or convert characters into text. See OCR.

(3) In video, to move across a picture frame a line at a time, either to detect the image in an analog or digital camera, or to refresh a CRT display.

(4) To search a data file sequentially for specific content.

(5) To search an executable file for a particular pattern. See antivirus program.

(6) To sequentially search for peripheral devices attached to the computer.
Copyright © 1981-2019 by The Computer Language Company Inc. All Rights reserved. THIS DEFINITION IS FOR PERSONAL USE ONLY. All other reproduction is strictly prohibited without permission from the publisher.

Feedback
Flashcards & Bookmarks ?
Please log in or register to use Flashcards and Bookmarks. You can also log in with
Flashcards ?
My bookmarks ?
+ Add current page to bookmarks
Mentioned in ?
References in periodicals archive ?
He said: "The drill with strokes in this area is that they are taken to Borders General Hospital, where a brain scan is taken immediately on arrival.
I HAD TO GIVE MY MUM A BRAIN SCAN; NHS scandal as son told to hold down his dying mother for hospital X-ray
The volunteers had lumbar puncture tests to check their CSF for levels of amyloid and MRI brain scans to calculate brain shrinkage.
Test to detect Alzheimer's at its earliest stage 'seems possible'
While waiting for the brain scan I was standing holding dad's hand and he pulled me down to him and said, "Sam, I love you very much".
ROTTEN TO THE HEART: ULSTER'S NHS CRISIS: My Dad had a brain clot but there was no bed
Scientists compared the brain scans and found that changes in DTI imaging better explained declines in memory than did measuring hippocampus volume through a traditional MRI.
New brain scan better detects early signs of Alzheimer's
If the link to brain wiring can be proved it would raise the prospect of using brain scans to help in diagnosing psychopaths, and provide insights with which to develop new therapies.
Psychopaths' brains are differently wired
In the brain scan, the researchers examined bursts of activity in regions known to be involved in the collection and sharing of memories.
Exercise is good for aging brain: Study
Each participant took a blood test and underwent a PET brain scan.
New Blood Test Can Detect Alzheimer's 20 Years Before Symptoms Manifest
It is not known why or in what context Ariana had a brain scan but she has used the image to speak out about mental health, as she did recently in British Vogue.
Ariana Grande shares her brain scan to show 'terrifying' levels of PTSD; Ariana Grande opens up about mental health awareness and reveals in the wake of the Manchester bombing, she is showing high levels of PTSD
Scientists said some brain scans revealed "extremely promising" effects on damaged neurons of those who received the treatment.
Parkinson's drug trial offers glimmer of hope for brain cells
In predicting intelligence from brain scans, the algorithm is doing something that humans cannot, because even an experienced neuroscientist cannot look at a brain scan and tell how intelligent a person is, the researchers said.
New algorithm that may predict your intelligence: Study
Based on the results of that test, Beaty and colleagues developed a predictive model and tested against brain scan data collected for earlier studies on creativity.
Creative Brain Wired Differently
The results were compared and showed incredibly that there was little difference in the results of the brain scan between the people who had actually played the piano and those that had imagined doing it!
YOUR HEALTH with Kathryn Luczakiewicz, from The WellBeing Centre, Saltburn