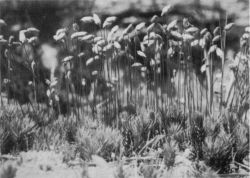 Feedback
Flashcards & Bookmarks ?
Please log in or register to use Flashcards and Bookmarks. You can also log in with
Flashcards ?
My bookmarks ?
+ Add current page to bookmarks
Mentioned in ?
References in periodicals archive ?
Betadiversity: Effect of geographical distance and environmental gradients on the rocky outcrop bryophytes. Cryptogamie Bryologie, 35(2), 133-163.
Composicion y distribucion de hepaticas (Marchantiophyta) en un intervalo altitudinal en la Cordillera Oriental de Colombia
Recent literature on bryophytes. Bryologist 120(1): 70-96 120 (2): 212-235, 120(3): 347-360, 120(4): 521-536.
Bibliografia Botanica Iberica, 2017. Bryophyta
Comparison of extract bio-activities of in-situ and in-vitro grown selected bryophyte species.
SCREENING OF ANTIMICROBIAL, CYTOTOXIC EFFECTS AND PHENOLIC COMPOUNDS OF THE MOSS AULACOMNIUM ANDROGYNUM (HEDW.) SCHWAGR (BRYOPHYTA)
The number of ground-dwelling bryophytes was the greatest and the coverage of the bryophyte layer the highest on Bl, followed by Al, where the abundance of short-lived bryophyte species was high.
FOREST ECOSYSTEM RECOVERY IN 15-YEAR-OLD HYBRID ASPEN (Populus tremula L. x P. tremuloides Michx.) PLANTATIONS ON A RECLAIMED OIL SHALE QUARRY
CATALOGUE OF OAK'S EPIPHYTIC BRYOPHYTES (Quercus humboldtii: Fagaceae), IN THE MUNICIPALITY OF TIPACOQUE, BOYACA-COLOMBIA
Catalogo de briofitos epifitos de roble {quercus humboldtiv. fagaceae), en el municipio de tipacoque, Boyaca-Colombia
In order to be able to get a better grasp of the interactions that might exist between the lichens and the bryophytes, that is, between inter-category lichens and lichens and the diameter of the given phorophyte, a statistical analysis is clearly indispensable.
Corticolous lichen flora on Quercus suber L. in the wetlands of El Kala national park (North-Eastern Algeria)
Validations and descriptions of European syntaxa of vegetation dominated by lichens, bryophytes and algae
Descripcion y validacion de sintaxones europeos de la vegetacion dominada por briofitos, liquenes y algas
In 1962, Woodbury (1963) found that, with the exception of a few side streams and springs of fresh clear water, the algal, hydrophyte, and bryophyte flora of Dinosaur National Monument was notoriously poor, due, he speculated, to the annual spring flooding by the Green and Yampa rivers and the heavy sediment loads they carry.
Hydrologic alteration affects aquatic plant assemblages in an arid-land river
We have a list of Estonian hemerophobic forest bryophyte species (Trass et al., 1999), also lists of indicator species for Estonian woodland key habitats of different forest communities (RT, 2010), but there is no up-to-date list of Estonian mire bryophytes, although bryophytes are the main components in mires and in peat.
Bryophytes in Estonian mires