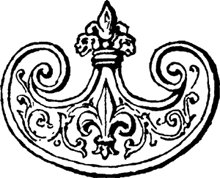 buckler
An ornament used in the decoration of friezes; sometimes circular or lozenge-shaped.
McGraw-Hill Dictionary of Architecture and Construction. Copyright © 2003 by McGraw-Hill Companies, Inc.

Feedback
Flashcards & Bookmarks ?
Please log in or register to use Flashcards and Bookmarks. You can also log in with
Flashcards ?
My bookmarks ?
+ Add current page to bookmarks
Mentioned in ?
References in classic literature ?
Thus speaking, he opened another hutch, and took out from it a couple of broadswords and bucklers, such as were used by the yeomanry of the period.
The contents of that cupboard are an answer to all my enquiries; and I see a weapon there'' (here be stooped and took out the harp) ``on which I would more gladly prove my skill with thee, than at the sword and buckler.''
View in context
As he sat him down, the cloak fell apart disclosing a sword and buckler as stout as Robin's own.
'Tis our duty in life to help each other, and your keen shaft shows me that you are a man worthy of some attention." So the friar knight got him up gravely, though his eyes twinkled with a cunning light, and laid aside his beloved pie and his cloak and his sword and his buckler, and waded across the stream with waddling dignity.
"I am not so strong as you," continued Robin; "that helmet and sword and buckler would be my undoing on the uncertain footing amidstream, to say nothing of your holy flesh and bones."
View in context
Not a napkin should he carry on his arm, but a buckler. in good time, though, to his great delight, the three salt-sea warriors would rise and depart; to his credulous, fable-mongering ears, all their martial bones jingling in them at every step, like Moorish scimetars in scabbards.
View in context