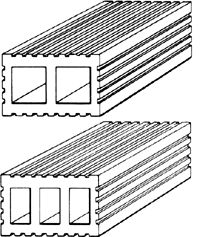 structural clay tile units
A hollow masonry building unit composed of burnt clay, shale, fireclay, or mixtures thereof, having parallel cells or cores (or both) within a single tile.
McGraw-Hill Dictionary of Architecture and Construction. Copyright © 2003 by McGraw-Hill Companies, Inc.

Feedback
Flashcards & Bookmarks ?
Please log in or register to use Flashcards and Bookmarks. You can also log in with
Flashcards ?
My bookmarks ?
+ Add current page to bookmarks
Mentioned in ?
References in periodicals archive ?
Caption: In 2017, Pewabic released the Guardian Building tile as part of its "Postcards from Detroit" tile series that commemorates favorite Detroit destinations.
Of Art and Architecture: PEWABIC POTTERY: Mary Chase Perry viewed the world with eyes that thirstily drank in the beauty in nature. Her artist's spirit led her to reject the machine-made world and turn toward the unique. Her passion for individuality was fired into every piece of ceramic art that she turned out in her life's work at Detroit's celebrated Pewabic Pottery
The sky and road tiles were placed into the easy piles, building tiles with only one window were put into the medium, and all other tiles placed into the difficult pile.
Up for Auction!
ITRI's Spray IT uses a tin-oxide material laced with minute amounts of lithium and fluorine that can be sprayed on glass or building tiles. The material is less costly than the silver-based films that are commonly used in reflective materials, ITRI says, and can be applied without specialized equipment.
ITRI garners two more WSJ Technology Innovation Awards
Inside the building tiles have been laid and windows fitted.
Hospice launches '400 countdown campaign'
Search no further than Hexabits--colorful, flexible building tiles that combine the creativity of crafting, the simple pleasure of puzzles, and the challenge of construction toys.
Imagine, create, connect with Hexabits
Broken glass is already being crushed up and recycled to produce new road surfaces and an innovative way of steam washing domestic refuse is producing a fibre which could be used to make building tiles in the future.
Is approach wrong? Gordon Wood, waste management spokesman for the Royal Institution of Chartered Surveyors in the West Midlands, bemoans today's throw-away society
The suspended workers are from two factories that make exterior building tiles in Tokoname, Aichi Prefecture, and Ueno, Mie Prefecture.
Tile maker Inax suspends workers with pay at 2 plants