[′bilt‚əp ′bēm]
(engineering)
A structural steel member that is fabricated by welding or riveting rather than being rolled.
McGraw-Hill Dictionary of Scientific & Technical Terms, 6E, Copyright © 2003 by The McGraw-Hill Companies, Inc.

A beam composed of multiple parts, such as a box beam, compound beam, lattice beam, and angle girder. See also: Beam
Illustrated Dictionary of Architecture Copyright © 2012, 2002, 1998 by The McGraw-Hill Companies, Inc. All rights reserved
The following article is from The Great Soviet Encyclopedia (1979). It might be outdated or ideologically biased.

an element of framed structures consisting of individual angle irons, channels, I-beams, and similar simple metal sections joined into a single unit by batten plates or lattices. Built-up beams are chiefly used as structural elements under compression, such as columns or chord members under compression in trusses. They are used particularly where the danger of buckling necessitates an increase in the cross-sectional radius of gyration of some member, that is, a reduction in the member’s flexibility. In such cases, the cross-sectional components of a built-up beam can be separated sufficiently to prevent buckling and then connected by single-or double-diagonal crossbars or by batten plates. 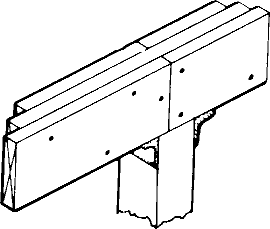 built-up beam on a post
1. A beam made of structural metal units (such as plates and angles) which are riveted, bolted, or welded together.
2. A beam of precast concrete units which are joined by shear connectors.
3. A flitch beam.
4. A timber made up of several pieces fastened together, forming one of larger dimensions.

compound beam
A rectangular beam composed of smaller timbers over which planks are nailed on each side; the composite unit is joined together by bolting or by gluing.
McGraw-Hill Dictionary of Architecture and Construction. Copyright © 2003 by McGraw-Hill Companies, Inc.