buttress, mass of masonry built against a wall to strengthen it. It is especially necessary when a vault or an arch places a heavy load or thrust on one part of a wall. In the case of a wall carrying the uniform load of a floor or roof, it is more economical to buttress it at certain intervals than to make the entire wall thicker. Even when a wall carries no load, it is usually buttressed rather than uniformly thickened. For a load-bearing brick wall more than 8 ft (2 m) high a buttress is used every 20 ft (6 m). The decorative possibilities of the buttress were discovered in the ancient temples at Abu Shahrein in Mesopotamia (3500–3000 B.C.), where they were used both as utilitarian and decorative forms. The Romans employed buttresses, which sometimes projected from the exteriors of the walls and were then left as mere piles of masonry, without architectural treatment. But in the large structures, such as basilicas and baths, the buttresses that received the thrusts from the main vaulting were confined to the interior of the building, where they served also as partition walls. The basilica of Constantine in Rome (A.D. 312) exemplifies this arrangement. In the medieval church, the groined vaults, concentrating their great lateral thrusts at points along the exterior walls, required buttresses as an essential element to achieve stability. Beginning with Romanesque architecture about A.D. 1000, a steady evolution of buttresses can be traced, from the simple, slightly projecting piers of the 11th cent. to the bold and complex Gothic examples of the 13th, 14th, and 15th cent. Builders in England, Germany, and N France achieved striking architectural effects. They devised the flying buttress, an arch of masonry abutting against the wall of the nave; the thrust of the nave vault could thus be received and transferred to the vertical buttress built against the outside walls of the side aisles. These flying arches, at first concealed beneath the roofs, began to be exposed outside the roofs in the mid-12th cent. Later they were enriched with gables, stone tracery, and sculpture and were topped with pinnacles to give them extra weight. They constitute, especially in such French cathedrals as Amiens, Beauvais, and Notre-Dame de Paris, the true expression of the elasticity and equilibrium which were the basic principles of the Gothic structural system. 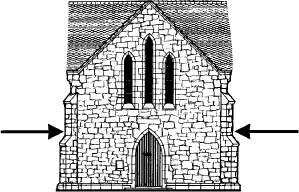 Feedback
Flashcards & Bookmarks ?
Please log in or register to use Flashcards and Bookmarks. You can also log in with
Flashcards ?
My bookmarks ?
+ Add current page to bookmarks
Mentioned in ?
References in periodicals archive ?
Caption: Gargoyles look down on figures on the flying buttresses of St.
Largest-ever retrospective underscores Hieronymus Bosch's Catholic faith
In order to quantify buttressing and associated stem volume, the height and diameters of conical basal buttresses and connected tree boles can be transformed into frustums for calculating volumes and the volumes can be converted to ratios for each tree.
Variation in buttressing form and stem volume ratio of baldcypress trees
To light the art in the buttresses, Zbrizher specified two in-ground, asymmetric uplights (39-W T4 CMH), which are recessed in the gutter under each respective carving.
Oval everlasting: thanks, in part, to a memorable lighting scheme, the Richmond Olympic Oval will live on long after the 2010 Winter Games come to a close
longicornis prefers large trees bearing buttresses and presenting burrows at their base where the individuals hide during daytime.
Microhabitat use by the whip spider Heterophrynus longicornis (Amblypygi, Phrynidae) in Central Amazon
This book buttresses Nanni di Banco's high place in any history of Florentine art, and, by presenting him as an exemplar of an artist who rose to fame by means of his own virtu, it addresses the important issue of how civic prominence, social advancement, and artistic accomplishment coexisted in a person who practiced a manual art in the early fifteenth century.
The Sculpture of Nanni di Banco
The tussocks are formed by radial units that we name buttresses. Each is a short rhizome that grows centrifugally and when the center dies buttresses become independent of each other.
Monk's tonsure-like gaps in the tussock grass Spartina argentinensis (Gramineae)
A method of mastoidectomy called improved radical mastoidectomy with flap (IRMF) consists of the saucerization of all bony buttresses, the excision of the mastoid apex, the dissection of all diseased tissues, the alignment of the mastoid cavity by an inferiorly based fascioperiosteal flap, and the creation of a large meatoconchoplasty.
Fascioperiosteal flap and neo-osteogenesis in radical mastoidectomy: Long-term results
The increasing number of market participants buttresses the statistics.
ALL ROADS LEAD UP
For its diligent efforts, Tishman, along with the design and construction team, also won recognition for its work on the wave-inspired concrete buttresses - which form the building's most distinctive feature - with an "Award of Merit with Special Recognition" from the Concrete Industry Board.
Swimming and diving complex completed for Goodwill Games
Patrick Naarin noted the differences between limba and idigbo in the book, "A Second Collection of Wood Specimens, 100 Reproductions in Color." "The butt (of the limba tree) is characteristically buttressed, the buttresses being in the form of four relatively thin, wing-like outgrowths," he writes.
Limba: the light-colored West African wood
The greatest irony in Dole's attacks is that most media fare buttresses Republican politics.
Nightmares of depravity
In the twelfth century, however, the notion arose of designing large structures in such a way as to concentrate the weight of the roof in certain areas where outside buttresses of masonry could be built.
Flying buttresses