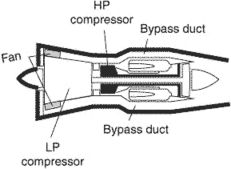 A type of gas turbine engine in which a portion of compressor air is bypassed around the combustion chamber and into the tailpipe. A bypass engine permits a higher combustion temperature than in a pure jet engine, with consequent improved efficiency in terms of higher thrust and low specific fuel consumption.
An Illustrated Dictionary of Aviation Copyright © 2005 by The McGraw-Hill Companies, Inc. All rights reserved

Feedback
Flashcards & Bookmarks ?
Please log in or register to use Flashcards and Bookmarks. You can also log in with
Flashcards ?
My bookmarks ?
+ Add current page to bookmarks
Mentioned in ?
References in periodicals archive ?
While Pratt & Whitney certainly competed for the engine to power this transport, it never seemed to take the high bypass engine requirement seriously as evinced by its first demonstrator's bypass ratio being little more than that of the then-flying JT3D.
From this review came a requirement for "a large military transport with high bypass engines." It was unusual, even irregular, to have a system requirement and a subsystem solution--the high bypass engine--both specified as a requirement.
Jets fans: the development of the fuel-efficient turbofan engine was foretold 30 years before it became a reality
Historically, the two leading domestic commercial airplane builders, Boeing with its 7J7 and McDonnell Douglas Corp., were planning to introduce propfan engines, also known as ultra-high bypass engines, on new jetliners.
Aircraft News - Europe
Ultrahigh bypass engines that offer the benefits of lower noise and lower fuel consumption also present a difficult challenge to the aircraft designer.
Modern, highly reliable gear systems will become a proven component of ultrahigh bypass engines in the future.
The turbofan of tomorrow