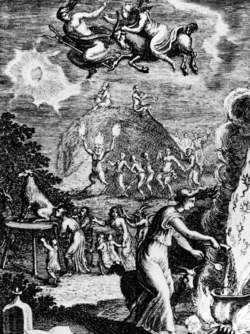 A Witch mixes a brew in a cauldron during a sabbat, 1687. Courtesy Fortean Picture Library.

In pagan tradition, the cauldron is the Great Mother's cosmic womb. In Celtic lore the cauldron, as a symbol of and source for hospitality, had an almost religious significance. Life, in the form of food, came from the cauldron.

The Gundestrup Cauldron was discovered in a peat bog in Denmark's Jutland in 1891. Made of embossed silver piece and twenty-seven inches wide at the rim, it dates from the first century BCE. Scholars believe it was taken from Central Europe to Denmark as war booty. The intricately detailed panels of the cauldron relate the Irish epic Táin Bó Cuailnge. In ancient Britain, cauldrons featured in many religious mysteries.

In ancient Babylon the cauldron that effected transformations changed shape often, like the womb that gave rebirth. It was controlled by Siris, mother of stars. Barbara Walker says Siris's cauldron was "the blue heaven, where she stirred the mead of regeneration." In Babylonian temples the cauldron was called apsu, or "abyss," and was used for ritual bathing and rites of rebirth. Odin, the Norse god,

obtained his power from three cauldrons in the cave-womb of the earth. He entered in the form of a phallic snake and beguiled the earth-goddess by making love to her. In Finnish folklore, a magic cauldron was the source of all things on earth. It was called Sampo and was located beneath a fairy island. At Vix, in France, a Greek bronze cauldron was discovered. It is known as a krater, and dates to about 500 BCE. It was found, with many other treasures, in the grave of a Celtic princess.

Medea, the Witch of Colchis in Greek myth, was a priestess of Hecate, goddess of the Moon. Medea had a cauldron and an entourage of twelve maidens, who helped in her rituals with the cauldron. There are many stories of kings and others being boiled in the goddess's cauldron and then being reborn. They included King Aeson, King Minos, Pelops, son of the king of Phrygia, among others.

One goddess closely associated with the cauldron was Kerridwen, ancient British fertility and mother goddess. A magical draught brewed in her Cauldron of Inspiration gave the recipient knowledge and inspiration. The brew had to simmer for a year and a day before it was ready. Branwen, another British goddess, had a Cauldron of Regeneration in which dead men could be brought back to life. Huge magic cauldrons were supposedly owned by several of the Irish and Welsh deities and their theft by semi-divine heroes is a popular theme of the early myths. The five feasting halls, or bruidne, of ancient Ireland each possessed a magic cauldron that duced just enough food to feed however many people were present.

The cauldron is invariably associated with Witches in the popular mind. The cauldron around which the three Witches of Shakespeare's Macbeth danced may be partly responsible. Certainly Macbeth is the source of the image of Witches throwing into the cauldron strange and grotesque items, such as "fillet of a fenny snake, in the cauldron boil and bake; eye of newt, and toe of frog, wool of bat and tongue of dog, adder's fork, and blind worm's sting, lizard's leg and howlet's wing. . . ." Shakespeare was obviously heavily influenced by the Church's distortion of the Old Religion. Yet there was some substance to the idea of Witches using cauldrons.

For the great sabbats, when large numbers of Witches got together to worship, many of them had to travel a considerable distance to reach the sabbat site. They drove along with them chickens, ducks, or geese, and carried a large cooking pot or a cauldron. At the site they got water from a stream, gathered local herbs (the seemingly obnoxious ingredients), and cooked up the fowl. So Witches did indeed have cauldrons at the sabbats—but not to boil up babies or the like!

Feedback
Flashcards & Bookmarks ?
Please log in or register to use Flashcards and Bookmarks. You can also log in with
Flashcards ?
My bookmarks ?
+ Add current page to bookmarks
Mentioned in ?
References in periodicals archive ?
The clash of ideas, lively debate and intellectual challenges are what make campuses the caldrons of discovery and progress that they are, or should be.
Does right wing mean left out?
Not surprisingly, the Pasto Ag Museum has caldrons, lard presses (used to press the water from the fat and to form it into blocks) and skimmers used to remove the cracklings from the melted fat.
For example, right after killing, the hog was dipped in a caldron of scalding water to loosen the bristles from the hide.
Muscling through time: Pennsylvania's Pasto Ag Museum points the way
Swirling tendrils of sweet steam rise above caldrons of boiling liquid.
Bitter sweets: a politically connected industry devastates the Everglades
The layout is the same: aisles of garrulous participants--with caldrons rather than telescopes--who obviously so love what they're doing that not to share it would seem worse than selfish.
Star partying: Amy Hettenhausen relishes the anonymity of her first star party
But I will never forget our first sight of huge caldrons of sodium being electrically heated to 600 degrees Fahrenheit, to remove chlorine.
WE VISIT OCTEL
As some internal church caldrons began cooling, relations with the larger San Francisco community were heating up.
Some labels don't stick; by listening to angry Catholics and negotiating with the city, Levada calms San Francisco
In a recent column to readers about the opening of the Technical Training Centre, Grey noted that its location symbolizes the technological change that has transformed newspapers: "It is perhaps appropriate that in a composing room that once housed Linotype machines and their caldrons of molten lead, we now have PCs and Macs that can connect electronically to all our internal systems and databases, to our offices across the continent and to Internet resources around the world."
Prepress training center
The story of the Grail may have been inspired by classical and Celtic mythologies, which abound in horns of plenty, magic life-restoring caldrons, and the like.
Grail
The students created magic caldrons complete with bats, a roaring log fire and all things appropriate to that baleful brew.
After the proverbial pinch pot
Lupus, porphyria, and smoking are all "metabolic furnaces." Several illnesses are "caldrons of agony," and his world is replete with objects that are "ocher yellow."
Becoming a Good Doctor: The Place of Virtue and Character in Medical Ethics
"Fire logs are laid out in the ages-old manner, torches are lit and the charm of the nine trees is spoken, resulting in two giant caldrons of fire.
One festival, heavy on the Gaelic