a grooved strip of lead used to join pieces of glass in a stained-glass window or a leaded light
Collins Discovery Encyclopedia, 1st edition © HarperCollins Publishers 2005

A slender rod of cast lead, with or without grooves, used in casements and stained-glass windows to hold the panes or pieces of glass together. 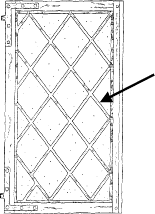 cames
A slender rod of cast lead, with or without grooves, used in casements and stained-glass windows, to hold together the panes or pieces of glass.
McGraw-Hill Dictionary of Architecture and Construction. Copyright © 2003 by McGraw-Hill Companies, Inc.

Feedback
Flashcards & Bookmarks ?
Please log in or register to use Flashcards and Bookmarks. You can also log in with
Flashcards ?
My bookmarks ?
+ Add current page to bookmarks
Mentioned in ?
References in periodicals archive ?
I was married, had a child--which is probably the best thing that ever came out of my marriage.
She is our champion: she has logged every superlative in the basketball record books. Now WNBA Houston Comets superstar Sheryl Swoopes makes history again, by coming out about her happy family life with her long-term lesbian love--and signing with Olivia. And she's only just begun
Berlin comes in February, and while the festival has lost its edge since the Wall came down, an award at Berlin still guarantees good promotion for a film.
(Genies)
There was a perfect stillness for a long while; then slowly the sun came. It covered the earth with warm growing hands that rubbed her like a grandpa rubbing ointment on the tired bones of a grandma.
Two views of my grandmother
In fact, she says that the UMC's struggle is much like what her parents went through when she came out to them in 1990.
Coming out before God: minister Beth Stroud worked up the courage to come out in her flock. Now featured in a PBS documentary, she may face a trial to determine her future as a pastor
I found it liberating to discover that I was part of a large bunch of married [gay] men." After his stepdaughter discovered some gay material on his computer in 1997, Jim came out to his current wife, to whom he has been married 21 years.
Gay men, straight lives: like a certain governor, many gay men married to women are now coming out, longing to live the life they've been missing
Since I came out three years ago, life has had its ups and downs.
Scott's merit
Why would someone have a problem with him if he came out?" Perhaps the catchiest observation of Bean's winsomeness, however, comes from his old boss, Los Angeles Dodgers manager Tommy Lasorda, who used to tease him: "Billy Bean, Billy Bean, the boy of every girl's dream."
Billy Bean's pitch: four years after coming out the ex-major leaguer faces a quandary: should he now push other pro athletes to do the same? (Pride 2003)(Cover Story)
During my second year of teaching, I finally came out to myself as a lesbian.
Coming out in The Advocate: a new tradition: if we call our struggle the gay rights movement, maybe it's because it all begins when someone steps forward
So he drove around the block and came back to the house ...
Our siblings, our secrets: they're often first to know we're gay, and their acceptance or rejection touches us to the core. What's the big deal about brothers and sisters?