arch, the spanning of a wall opening by means of separate units (such as bricks or stone blocks) assembled into an upward curve that maintains its shape and stability through the mutual pressure of a load and the separate pieces. The weight of the supported load is thus converted into downward and outward lateral pressures called thrusts, which are received by the solid piers (abutments) flanking the opening. The blocks, called voussoirs, composing the arch usually have a wedge shape but they can be rectangular with wedge-shaped joints between them. The underside of the arch is the intrados or soffit and the upper surface above the crown block (keystone) of the arch is the extrados. The point where the arch starts to curve is the foot of the arch, and the stones there are the springers. The surface above the haunch (just below the beginning of the curve) contained within a line drawn perpendicular to the springing line (from which the arch curves), and another drawn horizontal to the crown is the spandril. In modern fireproof construction the word arch is also used for the masonry that fills the space between steel beams and acts as a floor support. The arch was used by the Egyptians, Babylonians, and Greeks, chiefly for underground drains, and also by the Assyrians in the construction of vaulted and domed chambers. In Europe the oldest known arch is the Cloaca Maxima, the huge drain at Rome built by Lucius Tarquinius Priscus c.578 B.C. The Romans developed the semicircular arch, modeled on earlier Etruscan structures, in the vaults and domes of their monumental buildings. Its use was continued in early Christian, Byzantine, and Romanesque architecture. In the 13th cent. the pointed arch (used as early as 722 B.C. in Assyrian drains) came into general use. The contact of Europeans with Saracenic architecture during the Crusades is offered among other theories for its introduction into Europe. But it is likely that the pointed arch may have been independently rediscovered in Europe in the Middle Ages as a device for solving many of the mechanical difficulties of vault construction. Its adoption was an essential element in the evolution of the Gothic system of design. With the Renaissance there was a return to the round arch, which prevailed until the 19th-century invention of steel beams for wide spans relegated the arch to a purely decorative function. Although the circular and pointed forms have predominated in the West, the Muslim nations of the East developed a variety of other arched shapes, including the ogee arch used in Persia and India, the horseshoe arch used in Spain and North Africa, and the multifoil or scalloped arch used especially in the Muslim architecture of Spain. In modern architecture arches often take a parabolic shape. They are usually constructed with laminated wood or reinforced concrete, materials that give greater lightness and strength to the structure. See triumphal arch.

A basic architectural structure built over an opening, made up of wedge-shaped blocks, keeping one another in position, and transferring the vertical pressure of the superimposed load into components transmitted laterally to the adjoining abutments.

The first or last of a series of arches located next to an abutment.

A sharply pointed two-centered arch, whose centers of curvature are farther apart than the opening.

An arch that occurs where a vault intersects a wall.

An arch that supports an inner wall where the outer wall is supported in a different manner, such as a brick arch behind a stone lintel.

An arch that is formed by a curved solid plate or slab, as contrasted with one formed with individual members or curved ribs.

A flattened arch designed by joining a quarter circle to each end of a false ellipse; a three-centered arch with a crown whose radius is greater than the outer pair of curves.

A round arch resting on two large corbels with curved profiles.

An arch within a wall that contains a recessed flat wall rather than framing an opening. Used to enrich an otherwise unrelieved expanse of masonry.

An arch rising only to a slight point struck from two centers within the arch.

A form of segmental arch in which the center of the arch is omitted and is replaced by a decorative feature usually applied to a wall above the entablature over a door or window.

A flat segmental arch with a slightly upward curve in the intrados and sometimes also in the extrados.

An arch that takes the form of an inverted catenary, i.e., the curve formed by a flexible cord hung between the two points of support.

A five-Iobed pattern divided by cusps; a cusped arch with five foliations worked into the intrados; a cinque-foil tracery at the apex of a window.

An arch whose intrados takes the form of a segment of a circle.

in architecture, a curved, structural member spanning an opening in a wall or a space between two supports—piers, columns, pylons, and the like. Depending on the size of the opening, the stress, and the purpose served, the arches are made of stone, reinforced concrete, metal, or wood. Depending on the shape of the curve, arches are distinguished as semiround or semicircular (the most widespread type), lancet (characteristic of Gothic architecture), horseshoe (common in the architecture of the Arabic countries), ogee, multifoil, rampant (with supports of different heights), and so on. Arches (stone) first appeared in the architecture of the ancient East, where there was no wood suited to the construction of large horizontal beamed ceilings. Later, arches were widely used in the architecture of ancient Rome (in buildings, aqueducts, and triumphal arches). Modified in keeping with the system used to construct vaulted ceilings and the demands of style, arches have continued to be an important architectural element. Triumphal arches, either standing alone or as a part of a building (as the arches in the General Headquarters Building in Leningrad), sometimes determine the character of an ensemble.

In modern construction, arches are used as the supporting elements of roofs, bridge spans, viaducts, and the like. Under the load the arch works mainly on the pressure principle and, in distinction to beams and girders, transmits not only the weight (vertical load) but also the pressure (horizontal thrust) which is resisted by the support, the tie beam, and the counterfort. In structural diagrams arches appear as hingeless, two-hinged, and three-hinged. The stability of the supports in hingeless arches is ensured by hard fixing in the structures supporting the arch. In planning the arch, the outline of its axis is so designed that the permanent load (the arch’s own weight and the weight of the ceiling, roofing, and other elements supported by it) are converted into compressive stress, thereby assuring the smallest size of its cross section. Lattice arches, usually made of wood or metal, are called trussed arches.

[ärch]
(civil engineering)
A structure curved and so designed that when it is subjected to vertical loads, its two end supports exert reaction forces with inwardly directed horizontal components; common uses for the arch are as a bridge, support for a roadway or railroad track, or part of a building.
McGraw-Hill Dictionary of Scientific & Technical Terms, 6E, Copyright © 2003 by The McGraw-Hill Companies, Inc.

A structure, usually curved, that when subjected to vertical loads causes its two end supports to develop reactions with inwardly directed horizontal components. The designations of the various parts of an arch are given in the illustration. The commonest uses for an arch are as a bridge, supporting a roadway, railroad track, or footpath, and as part of a building, where it provides a large open space unobstructed by columns. Arches are usually built of steel, reinforced concrete, or timber. 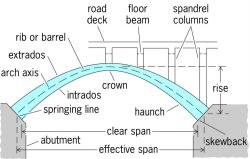 On the basis of structural behavior, arches are classified as fixed (hingeless), single-hinged, two-hinged, or three-hinged. An arch is considered to be fixed when rotation is prevented at its supports. Reinforced concrete ribs are almost always fixed. For long-span steel structures only fixed solid-rib arches are used. Because of its greater stiffness, the fixed arch is better suited for long spans than hinged arches.

Concrete is relatively weak in tension and shear but strong in compression and is therefore ideal for arch construction. Precast reinforced concrete arches of the three-hinged type have been used in buildings for spans up to 160 ft (49 m).

Steel arches are solid-rib or braced-rib arches. Solid-rib arches usually have two hinges but may be hingeless. The braced-rib arch has a system of diagonal bracing replacing the solid web of the solid-rib arch. The world's longest arch spans are two-hinged arches of the braced-rib type. The spandrel-braced arch is essentially a deck truss with a curved lower chord, the truss being capable of developing horizontal thrust at each support. This type of arch is generally constructed with two or three hinges because of the difficulty of adequately anchoring the skewbacks.

Wood arches may be of the solid-rib or braced-rib type. Solid-rib arches are of laminated construction and can be shaped to almost any required form. Arches are usually built up of nominal 1- or 2 in. (2.5- or 5-cm) material because bending on individual laminations is more readily accomplished. Because of ease in fabrication and erection, most solid-rib arches are of the three-hinged type. This type has been used for spans of more than 200 ft (60 m). The lamella arch has been widely used to provide wide clear spans for gymnasiums and auditoriums. The wood lamella arch is more widely used than its counterpart in steel. The characteristic diamond pattern of lamella construction provides a unique and pleasing appearance. See Bridge, Buildings, Truss

The masonry arch can provide structure and beauty, is fireproof, requires comparatively little maintenance, and has a high tolerance for foundation settlement and movement due to other environmental factors. Most arches are curved, but many hectares (acres) of floor in highrise office and public buildings are supported by hollow-tile jack (flat) arches. If a curved arch is wide (dimension normal to span), the arch is referred to as a barrel arch or vault. The vault cross section may have several different shapes. Contiguous vaults may be individual, may intersect, or may cross. A four-part vault is termed quadripartite. Contiguous quadripartite vaults that are supported at the corners by columns are masonry skeletons of large cathedrals. 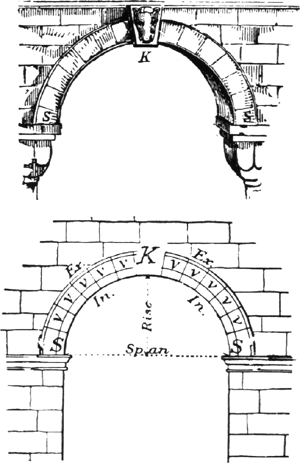 1. a curved structure, normally in the vertical plane, that spans an opening
2. a structure in the form of an arch that serves as a gateway
3.
a. any of various parts or structures of the body having a curved or archlike outline, such as the transverse portion of the aorta (arch of the aorta) or the raised bony vault formed by the tarsal and metatarsal bones (arch of the foot)
b. one of the basic patterns of the human fingerprint, formed by several curved ridges one above the other
Collins Discovery Encyclopedia, 1st edition © HarperCollins Publishers 2005

(ARCHitecture) The CPU that a Linux distribution runs on. An AltArch (alternative arch) refers to an optional CPU for a particular version. See Linux distribution.
Copyright © 1981-2019 by The Computer Language Company Inc. All Rights reserved. THIS DEFINITION IS FOR PERSONAL USE ONLY. All other reproduction is strictly prohibited without permission from the publisher.