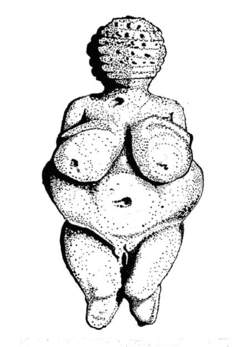 Margaret Murray says that "the earliest known representation of a deity is in the Caverne des Trois Frères in Ariège (France), and dates to the late Paleolithic period." This is a cave painting of a figure known as "The Sorcerer," and the period is approximately 20,000 BCE. The Paleolithic people were hunters, while the Neolithic and Bronze Age people were pastoral and agricultural. Little remains of the Paleolithic people beyond their flint tools, engraved bones, and the painted and sculptured caves. Of particular note about "The Sorcerer" and other similar cave paintings, is that they were rendered on a wall of the cave in a normally remote place. Many of the smaller animal pictures with it are fifteen feet or more above the floor level with the main figure high up, in the deepest niche, suggesting that this painting was not for mere ornamentation.

That "The Sorcerer" is a picture of a deity, as Murray suggests, is not certain. But it is highly probable that it depicts a man representing a deity—the God of Hunting. Success in the hunt was of primary importance at that time, and supplicating a hunting deity would have been a natural practice. The positioning of the painting would allow only a select few to view it, probably those involved in the supplication, or perhaps only the one playing the part of the hunting god. These rites would take the form of a ritual pantomime of the hunt to be undertaken. From clay models of bison and bear that have been found marked with holes from spears and javelins, it is known that such magical rituals for success in the hunt were carried out.

In the Forneau du Diable, at Dordogne, France, there is an engraving of a similar scene. Where "The Sorcerer" wears the mask, skin and antlers of a stag, the figure at Dordogne wear the mask, skin and horns of a bull. He is also playing what seems to be a musical instrument, perhaps as part of the ritual. A rock carving at Val Camonica, northern Italy, from the mid-fourth century BCE, shows a male figure with the antlers of a stag, and has what is possibly a horned serpent beside him.

Many cave paintings seem to be connected to the working of magic to ensure success in the hunt. Hans Baumann says of the mammoth with the red heart painted on the walls of the 270 meter-long Altamira caves in northern Spain, "While the hunters danced they burned with the desire to hit the heart. They could see the heart before them as a runner on a race track sees the tape while he is still miles away from it. . . before the hunt they made a supreme effort to store up in themselves as much presence of mind as they could muster against the moment upon which all would depend. For their hunting dances they slipped inside the hides of the animals they had already killed, because they wanted to `get inside' these animals. . . when it came to a fight they would aim unerringly at their tenderest spot."

Magic was performed not only to ensure success in the hunt. Equally important was fertility—fertility of the animals hunted, which was needed to continue the food source. Sculpted clay figures of copulating bison were discovered in the cave at Tuc d'Audoubert, France, indicating that this magic was also a part of Paleolithic life. And along with fertility of the animals was the need for fertility of humankind.

Clay models of pregnant women are an important part of this early magic. Many examples have been found and are generally referred to as "Venus" figurines. They include the Venus of Laussel, carved into a slab of rock in Dordogne, France, the Venuses of Abri Patand (France), Malta (Malta), Lespugue (France), and the well-known Venus of Willendorf (Austria). Similar are female figures from Kosteinki (Ukraine), Achilleion (Thessaly), Moldavia (Romania), and La Marche

(France), with sites ranging from France and Italy to Siberia and southern Russia. The common feature of these figures is that they are faceless and the feminine attributes are greatly exaggerated. The Venus of Willendorf is an excellent example, with its enlarged belly, as though it is pregnant, and its pendulous breasts. Frequently the figure exhibits greatly enlarged genitalia.

These female figures are generally accepted as being representations of the Mother Goddess, yet they could well be simply magical "poppets," promoting fertility in the women of the tribes and symbolizing the women themselves rather than the goddess.

Doreen Valiente mentions what appears to be a Witch ritual—certainly a round dance by women—depicted in a cave painting from Cogul, Spain.

Feedback
Flashcards & Bookmarks ?
Please log in or register to use Flashcards and Bookmarks. You can also log in with
Flashcards ?
My bookmarks ?
+ Add current page to bookmarks
Mentioned in ?
References in periodicals archive ?
Now, with the Borneo cave art, the scientists are able to construct a rough timeline of how art developed in the area.
Red bull drawn in cave dated to 40,000 years ago
The following week, on Sunday, September 16, children aged 8-16 can join an outdoor class and spark their resourceful talents with fire lighting and reveal their artistic side by creating cave art.There is no additional cost for this activity which runs from 1pm-2pm.
September Sunday fun at Drumlanrig
The speakers said that Swat valley had a rich cultural heritage tracing back to over 5, years where both tangible and intangible heritage existed in a variety of forms, including ancient rock paintings, cave art, woodcarving, rock carving and stone architecture.
Call for highlighting rich heritage of Swat valley
Just when you thought it was time to permanently chisel history books into stone, new archaeological discoveries -- helped along by high-tech sensing equipment -- are upending a great deal of what we thought we knew about the first Americans, Neanderthals, cave art, Celts, Stone and Iron Age technology, ancient Troy, and so much more.
Vikings; Raiders from the Sea
When the cave art was discovered in 1879, people thought it was a hoax.
Are those paintings moving?
Special mentions went to "The Grand Masters of the Chauvet Cave," produced by Andana Films and directed by Christian Tran, for promoting awareness of Paleolithic cave art; "Chambord: The Castle, the King and the Architect," produced by Stphane Milliere and Gedeon Programmes and directed by Marc Jampolsky, for furthering awareness of architectural history; and "Stone Age Cinema," produced by MC4 Productions and directed by Pascal Cuissot and Marc Azema, for its excellent use of image and imagination in the interpretation of Paleolithic cave art.
Bravo
Beginning this spring, visitors can witness this treasure at the new on-site museum, Lascaux IV: International Centre for Cave Art. Designed by Snohetta, the building blends into the hilly terrain of Vezere Valley, save for a concrete facade that sticks out like a gaping crack.
Lascaux IV
Profusely illustrated throughout with 150 black-and-white photograph images and illustrations, "Sheela na gig: The Dark Goddess of Sacred Power" by Starr Goode traces the origins of the Sheela na gig from Medieval times to Paleolithic cave art; reveals the sacred display of the vulva to be a universal archetype and the most enduring image of creativity throughout the world; provides meditations on the Sheelas the author encountered in Ireland, England, Scotland, and Wales, allowing readers to commune with the power of these icons.
Sheela na gig: The Dark Goddess of Sacred Power
In recent years they have covered topics from Iron Age hill-forts to cave art in France.
events DiArY
Cave art dating from the 5th century BC in Zuojiang Huashan in China, the dolmens of Antequera in Spain and Gibraltar's Neanderthal grottoes are also in contention.
UNESCO meets to expand World Heritage
Following this, several chapters explore the prehistoric darkness of caves, including cave art, use of caves in ritual in prehistoric Italy and Sardinia, and the changeable levels of disorientation depending on portable light and sensory adaptation.
The Archaeology of Darkness